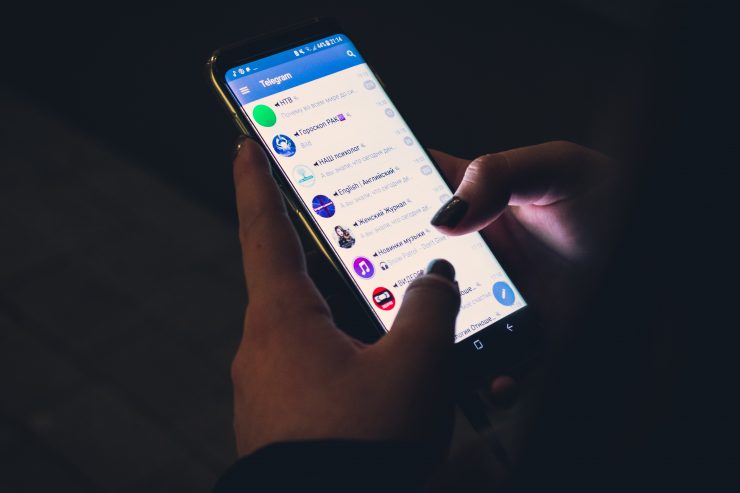 AppStation is a very popular app, claiming that you can earn money playing games and downloading apps.

While you can make money playing games, it’s not as easy as it sounds.  In some cases, the app has crazy requirements, which may eat up your time for hours, only to pay out pennies, whereas other games may be as boring as watching leaves fall from the trees.  Don’t worry, I will talk about this later on in this review.

Nonetheless, you can make money playing games, but does AppStation make it fun to do so?  Do they make it easy?  We’re about to find out.

In today’s review, I downloaded the AppStation app, letting you know how it works, what you can maybe make, and if it’s worth the download.  As in all of my reviews, I only recommend apps that I would only use, regardless of my affiliation.

AppStation is a 100% free app that pays you to play games.  According to the app’s description, they have hundreds of games you can choose from, essentially rewarding you for every minute you play.  The app states, in bold, that you can reach your first payout within the first 10 minutes.  That’s quite the claim!

The app was founded by justDice, a company that is said to “build exciting app discovery platforms, aiming to create challenging and fun workplaces.”  According to the LinkedIn profile, they have more than 50 million users, claiming to be a global market leader.  They are based in Germany with 11-50 employees.

As I’m writing this review, they have more than one million downloads with a 3.9/5 rating.

To download the AppStation app, you can only do so via the Google Play Store.  At this moment, they don’t have an iOS version, mainly because Apple doesn’t approve these types of apps.

To sign up for AppStation, you can do it in one of three ways, either via Facebook, connecting your Google account or simply creating a new account on the app.  It’s up to you as to how you want to sign up.  No matter how you do it, it will lead to the same dashboard, I promise.

After you connect/create your account, it will ask for your age and gender so that it can learn a bit more about you.

The sign-up process was very easy, only taking a minute at most to complete.

Once you sign up, you can access your dashboard.  When I signed up, they credited me with 4444 coins, about a $0.47 value.  I know it may sound like a lot of coins, but it’s really not.  I will get into the rewards later on.  For now, don’t get fooled by the thousands of free coins.

For now, let’s take a gander at the dashboard and see how it works.

Using the app is fairly straight-forward.  On your menu, as you can see, you can access the featured games, your apps, your wallet as well as your past payments.  You can also invite your friends if you know of anyone who may want to take advantage.

99% of the time, you’re going to spend your time on the “Featured” tab to browse through the apps you want to download and play.

On your “Featured” tab, you will be presented with a myriad of games, from casino-like games to survey apps.  Depending on the time, you may see a few apps or you could see as many as 20+.  When I downloaded it, I had about 15~ apps on my dashboard. 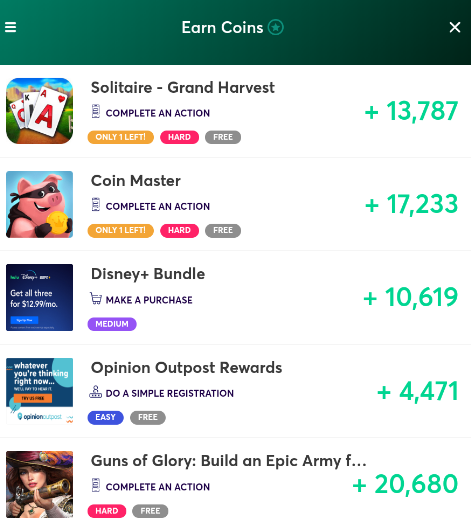 On the main dashboard, you can see the game, how hard it is to earn the coins, what it costs to download as well as how many coins you can earn.  Remember, the app will say you can earn thousands of coins, but in reality, every point, as mentioned is worth 0.000107.  And, no, that’s not a misprint, either.  It’s not as much as you think!  As a trick, just move the comma to the left once and add a period.  This is how much you will get paid.  So, 13,787 is really 1.3787$ in value.

Now, it’s not as easy as downloading the game/app, playing around with it at your leisure and earning those points.  If only it were that easy.

Instead, you will need to meet certain requirements in order to qualify.  This is important as failing to do so will lead to no payment.

For instance, using that screenshot above, you would have to meet the following guidelines below if you wanted to earn 17,233 coins when you download the Coin Master game… 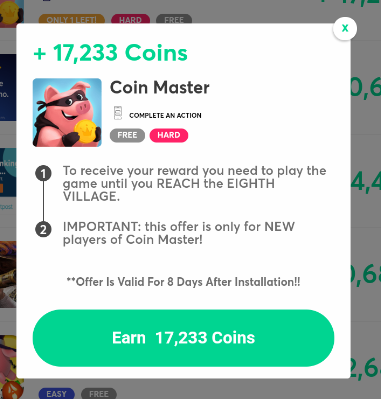 As you can see, you will have to reach the eighth village, and it’s only for new members only.  Not only that but the offer is only valid for eight days after install.  The app seems to do a good job in marking how hard the goal is.   They say this is a “hard” app, which is probably true, at least from what I read online.

As long as you don’t change your app permissions and you meet these restrictions, you shouldn’t have a hard time getting credit.

If you are interested in that app, click on the “Earn X Coins” and download the app.  Once you do, it will now show up in your “My apps” section.

The thing I hate about the app is that they use a very confusing points system.

Most survey sites and apps use a very simple one point equals a penny approach.  This is easy to understand, right?

Well, this isn’t the case with AppStation as every point is worth about 0.000107 each.  This can change, however, as you go up in the reward tiers.  Generally, the longer you wait to cash out, the more your points can be worth in some cases.  Of course, it’s a mind game, but do plan on getting a calculator out to determine how much your app download is really worth.  I know 10,000 points looks like a lot, but I can’t stress it enough; it isn’t!

As for the reward options, they offer a variety of options, including:

Once you cash out, it can take up to seven days to receive your payout.

What the Internet Is Saying

As in all of my reviews, I love to see what the internet is saying, compiling a pros and cons of sorts.  Below, I scoured the web and came up with what I thought were the most popular pros and cons.

5/10I don’t think you’re going to earn much on this app, maybe a few dollars at most.  While the premise sounds amazing, it’s going to take you some time before you even cash out with the app.  For instance, some ask you to reach level 50 whereas others ask you to buy packs within the game.  Simply put, the restrictions are crazy with some.  Let’s not even get started with the app quality.

For now, I’m not going to recommend it, but it doesn’t mean you shouldn’t at least check it out.  Who knows?  Maybe there’s an app that’s on there that you wanted to download.

In the end, you can make money downloading apps, but it’s going to take more work than you thought.  It’s not a scam, but it the app will lead you to many apps that question your sanity, I promise you that.