CashMagnet App Review: Get Paid to Do Nothing?

The CashMagnet app is said to get you money for doing absolutely nothing.  It may sound too good to be true, but I promise that it’s a legitimate app.  However, just because the app is legitimate, it doesn’t mean it’s worth the download.  As long as you don’t mind a third-party app running in the background, then it may be something to consider.  I don’t know how much you want to earn in your free time, but it could net you a few dollars a month.

In today’s review, I wanted to explore the CashMagnet app and let you know how it works, what you can make as well as if it’s worth your time.  As always in my reviews, I’m 100% honest, non-biased and you will never find me promoting garbage products.

With that being said, let’s jump and see what it’s all about.

At the moment, the CashMagnet app isn’t available for iOS devices; it’s only available for Android users.  And, unlike most apps, you won’t find it on the Google Play Store, either.  Instead, you will have to receive a special download link via the official site at CashMagnetApp.com.

To get the app, just head to the URL, enter your email as well as input a password to get started.  In doing so, you will receive a link as well as a user account to start making cash.

It’s 100% free to join and all you need is an Android smartphone to get started.  There’s no desktop version available, either.

As for who can join.  Anyone worldwide as long as you’re 18+.  However, like most apps, some countries won’t make as much as others.  If you find yourself not making a lot on other apps, then there’s a good chance you won’t make much on this one either.

What Exactly is the Cashmagnet App?

If you go to the official FAQ, it says that the app will allow you to earn extra income when you’re not using your phone.  I know it sounds vague, and it is, so I had to download the app to see exactly how it works.

Most of your earnings will come from an idle phone.  Every few minutes, you can earn about five points.  And, to start the “passive mode” feature, you will have to click on the “Start Earning” button, in which you can see in my graphic below.

When you do so, you’re allowing the app to start browsing sites and even installing games.  To me, it’s quite unethical, and it’s the reason it’s not listed on the official Google Play Store.

Now, you may be wondering how they can earn money from this.  Let me explain…

When you allow the app to control your phone, it’s going to click on advertisements, install games, watch ads, and so forth.  They are earning money from these activities and will split the costs with you.  In a way, they are frauding the advertisers as the people that buy these ads expect humans to watch them, not an automated app such as this.  When the app is able to take control of thousands of phones, the software makes it appear as if many people are legitimately taking part in these advertisements.

How Much Can I Earn?

Here’s the question you’re probably wondering about:  How much can I earn?

How much you make will greatly depend on a few factors, including where you live, what Android phone you’re using, how many games you have installed as well as how long you allow the app to run in passive mode.  Remember, the higher you rise in the ranks, the more you can earn.

There no real answer, but from digging around on Reddit and various Facebook groups, the median seems to be in the $10 to $15 per month range.  In this case, you would have to run your phone almost all day and be from either the United States, Canada or United Kingdom.  If you fall outside of these countries and rarely run the app, then you will be lucky to earn a few dollars a month, if that.

This number could be much higher if you were to run multiple phones.  The app can be installed on multiple devices, but you’re limited to four devices on one IP address.

In short, this app won’t make you a lot of money, and even so, it will take a lot of work to let it run and drain your battery to participate in unethical activities.

The Limits on Passive Income

As imagined, you start at level 1 and then move onto the next level as you use the app. 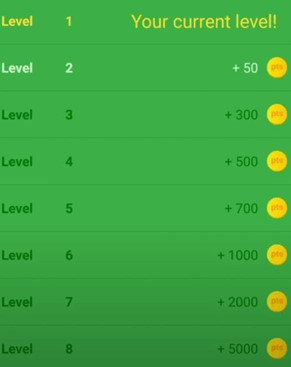 The more coins you earn, the higher you can move up in the ranks, which leads to more time using the passive mode and even bonus coins, as noted above.  Even if you were to reach the highest level, you can only run the passive mode for 24 hours.

As a note, once you reach level three, the company allows you to manually install apps, which can earn you more time and coins.  You don’t have to interact with the apps, either, since you can delete them once you’re done doing so.

The CashMagnet app uses a coin system, and every 1,000 coins~ if worth about $1.  For instance, this is what my rewards page looked like when using the app: 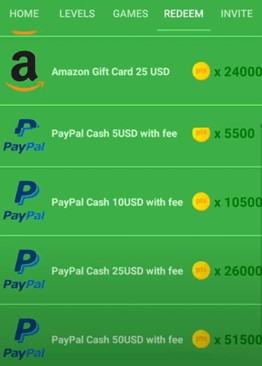 A $25 Amazon gift card will cost you 24,000 coins, whereas a $5 PayPal cash out will set you back 5,500 points.  The longer you wait to cash out, the more your points can technically be worth.

Right now, the app only allows you to cash out via PayPal or Amazon, but I see no problem with this as these are the two options most people want when it comes to rewards.  There are other rewards as well, including iTunes, Steam and Google Play, to name a few.

Once you do cash out, the FAQ notes it can take up to one month to receive your payment.  This is much longer than most competitors.  In fact, it could be one of the longest options.

For one, it does some shady stuff with your phone such as downloading games, clicking on ads, etc.  This is done so that they can make money and split some of the proceeds.  Think of the advertisers for a second.  How happy would you be if your ads or games were being downloaded for the sake of making money?  Frankly, I don’t like it.

In the end, there’s a reason this app isn’t on the Google Play Store.  Sure, you can make money and some people tend to like it, but I’m not going to give this app access to my phone.  If they already participate in these unethical activities, what else may they do?

As always, if you want to sound off in relation to this app, feel free to do so below.