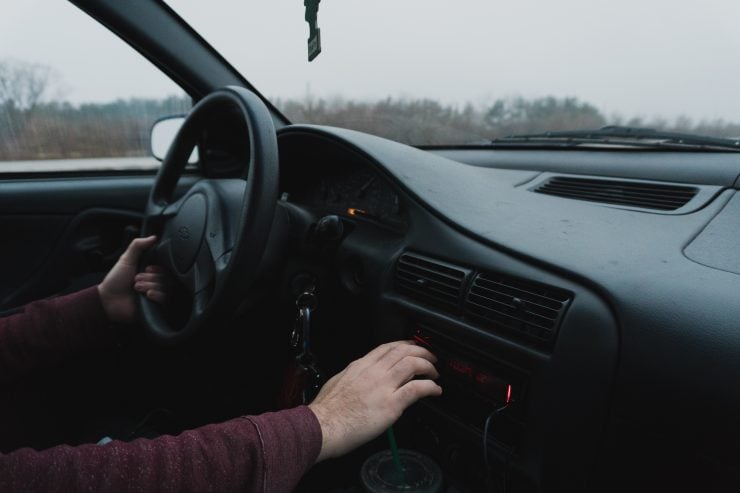 OnMyWay App Review: Drive and Get Paid? No.

The OnMyWay app says it will pay you to drive safely and that’s it.  All you need to do is download the app and keep your phone locked whenever you drive.  As long as you do so, you can start to earn rewards.

And, while it may sound too good to be true, it doesn’t appear to be so as it does seem to be quite legit, at least based on the reviews.  As I’m writing this, for example, the app has more than 750,000+ downloads with a solid 4.6/5 rating.  That’s not bad.

While the app may pay you to drive safely, you may be wondering how much and how often.  You may also be considering if it’s worth your time.  While the app may claim it pays you, it won’t be that great if you’re only making pennies every month.

So, in today’s review, I wanted to review the OnMyWay app.  I will download it, test it out and then let you know if it’s worth your time.  As in all of my reviews, I remain unbiased, only promoting what I find to be beneficial.  No matter what relationship I have with a company, I will be 100% honest, I guarantee you that.

If you drive and you want to earn money doing almost nothing while behind the wheel, let’s take a gander at the app and see if it’s worth the hype.

What is the OnMyWay App?

The OnMyWay app premise is simple.  All you need to do is download the app and let it essentially take over your phone.  In doing so, the app will disable your text and app alerts, but it will let you take phone calls as long as it’s connected to your car’s Bluetooth.  And, as long as you don’t unlock your phone and use it while the car is in motion, you will be rewarded, that’s it.  Every time you start to drive faster than 10 MPH, the app will automatically start, so you won’t have to worry about turning it on.

As for the company background, I couldn’t find much in terms of who runs it.  The only thing I could find that it’s the “only texting and driving solution that pays.”  To me, it’s always nice to know who’s running the app, but it’s not a deal-breaker.  In this case, I didn’t find out much.  The only reason I wanted to find out is that, oftentimes, it’s nice to know if you’re working with a larger company in case the rewards are worth chasing.  If they are backed by a larger VC firm, for instance, they could be around for a while.  If not, they could close up shop on the drop of a hat and you would be out your rewards.

Signing up for the OnMyWay App

To start making money driving with the OnMyWay app, they will ask for your email, a phone number as well as ask you to scan your driver’s license.  They do so because they want to make sure you are a licensed driver.  They only ask that you scan the back of your license to get started.  I know this can feel like an invasion of privacy, and I agree.  It’s 100% up to you if you want to proceed, but I highly advise against it as I don’t know what they do with your driver’s license information. 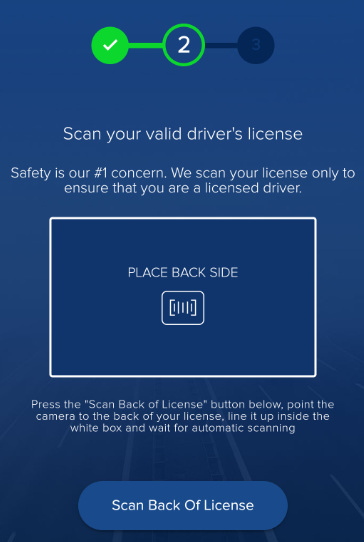 After you provide your email, a phone number as well as hand over your driver’s license, you will need to allow the app to enable the “Do Not Disturb” while you’re driving so that it can track your distances with accuracy.  You will also have to allow SMS access so that it can automatically send a text to anybody who contacts you when you drive.

In filling out your profile in its entirety, you will receive $10 in cash incentives immediately.

I will admit that it’s a lot to absorb for just about any app I have used.  Not only do they ask for your email and phone number but they want your driver’s license and a lot of access to your phone.  This is a lot to ask for.  Let’s see if it’s worth it. 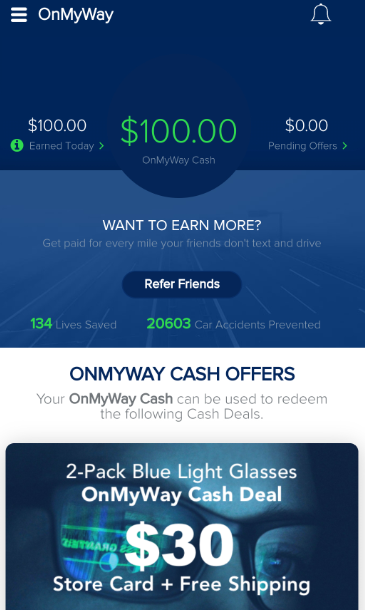 At the top, you can see how much you have earned as well as any pending offers.  Keep in mind that this is “OnMyWay Cash” and doesn’t equal cash.

Below your balance, you can see the many offers, in which you can use your “OnMyWay Cash” for.

But, first, let’s talk about how you can make money.

Earning Money on the OnMyWay App

Earning money on the app is straightforward.  As long as you have the app activated, it will automatically start earning you cash as you drive faster than 10 miles per hour.  All you need to do is keep your phone locked and not play with it to get rewarded.

For every mile you drive, the app will reward you with $0.05, again, as long as you don’t use your phone.  There are no limits nor are there caps on how much you earn.

Aside from earning $0.05 per mile, you can also earn $2 for every referral you bring in as well as another $0.02 per mile that they drive.

OnMyWay Money Does Not Equal Cash

Now, this is where the bad news comes in.

When you earn “OnMyWay Cash,” it’s not as easy as cashing out and seeing it pop up in your bank account or PayPal account.  Instead, you will have to use your cash toward offers on your dashboard.  These offers do change, but for the most part, it’s a “credit” of sorts that you can use toward a retailer.  In short, most of it is junk. 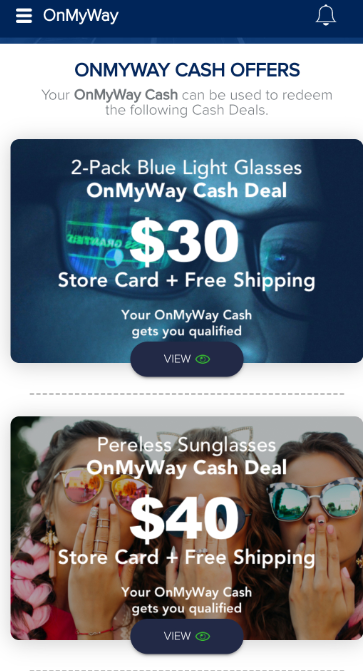 For example, when I was writing this, these were a few of the offers that I could take advantage of…

Again, these will change over time, but they follow the same theme.  Hopefully, you get the point and see that it’s not worth your time.

Keep in mind that many of these offers were from brands I have never heard of.  Plus, a lot of these cards were a discount of sorts, so you wouldn’t necessarily get it for free.  Rather, you would get a discount.  In short, these offers weren’t any good and came from knock-off brands that I wouldn’t even touch.  They weren’t good prizes at all.

In the end, you won’t get paid cash (unless you hit the ridiculous demands).  Instead, you will only receive a “credit” to a sponsor store of sorts.  Bummer!

As mentioned, the app will take over many permissions on your phone, from being able to access your “Do Not Disturb” to using your text messages.   For instance, whenever someone messages you, it will automatically reply with this… 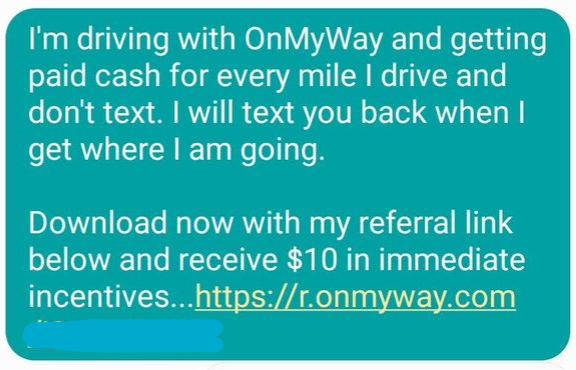 I found it to be quite annoying, but it’s part of having the app, I suppose.

Aside from that, the biggest annoyance was that you don’t earn cash.  Unless they change something in the future, your cash is only good for partner deals, most of which seem to come from companies I never have heard of.  So, if you want to give up your driving habits for a pair of $10 earrings, then maybe it’s worth it?

And, lastly, who knows what they do with your personal information when you sign up.  I’m just uneasy with this company.

What Are Other People Saying?

Looking at the app reviews, I found a lot of negatives as well as some positives.  As of late, however, most of the reviews were very negative, some going as far as calling it a scam.

Here’s what I found out when I browsed through the more than 8,000 reviews. 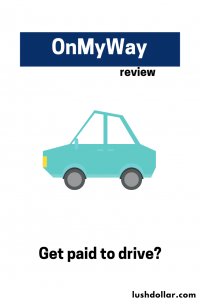 2/10I didn’t see anything great with the OnMyWay app, and I have no idea why they are so popular on the app stores.  You really don’t get paid to drive.  Rather, you get credits toward items you don’t want.  Plus, you have to give up your driving privacy, a lot of phone permissions and you have to scan your driver’s license.  No thank you!

In the end, I don’t find it to be worth it at all.  The offers were boring, the app drains your battery and I just felt like I gave up too much for too little.  That’s just me, but I feel you will think the same as well.  I don’t know why the app review is so high, but this can easily be manipulated.  Who knows?  I don’t trust it.

As always, if you want to vent and/or want to ask questions, that’s why I leave the comments section opened.  Feel free to sound off below!

In the meantime, if you want to want to make money driving, check out the more than 25+ ways you can do so in this guide.