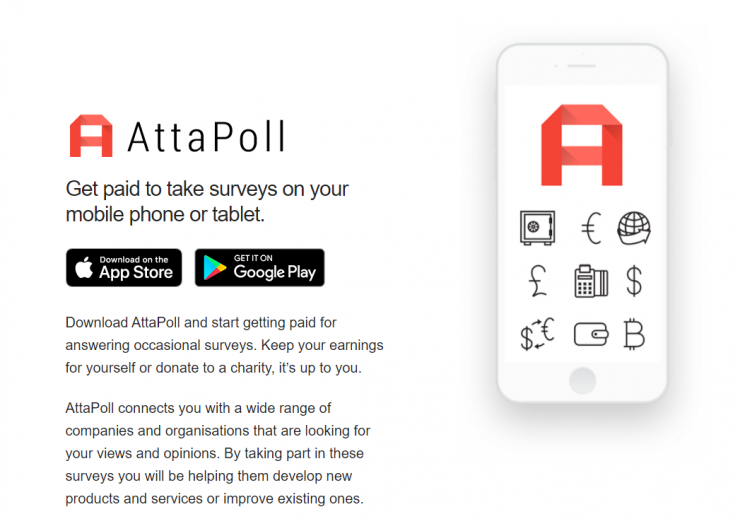 I was recently researching some paid survey apps as I normally do and happened to come across a highly rated survey app called AttaPoll.  Yes, it’s another paid survey app, but the key difference, at least to me, was that it had more than one million downloads.  Yes, that’s one million.

With those kind of numbers, I figured I would download the app and see why it was so popular.  With a solid 4.1 out of 5-star review on the Google Play store, it could be worth downloading.

As in all of my reviews, I love to download the app, review it in depth and then offer my insight as to whether or not it’s worth your time.  Of course, in the survey world, you won’t get rich, but you can earn $50 to $200+ a month answering a few surveys a day.  This is attainable if you have a few apps/accounts on various survey websites.

So, if you want another app to take surveys and/or you’re looking to make a few extra dollars a month, let’s see if the app is worth space on your phone.

The premise of AttaPoll is simple.  Take surveys on your mobile phone or tablet and earn cash.  Like the many survey apps I have talked about in the past, they connect you with organizations that are looking for your views.  It’s as easy as clicking on a survey of interest, answering the questions and then getting your credit if you qualify.

AttaPoll Ltd is operated by AttaPoll Ltd, a company based in the United Kingdom.  According to a business overview, they were incorporated on March 4, 2016.  Other than this information, I could not find much more about them.

To sign up for AttaPoll, you will have to connect a Google account to your AttaPoll account to start using it.  There’s no other alternative, unfortunately.

After you confirm your phone number and connect your Gmail account, you can then access your dashboard, which will allow you to start taking surveys immediately.

To qualify, you must be at least 16+ years old.  And, while anyone can join in the world, some countries may seem no surveys in comparison to others. 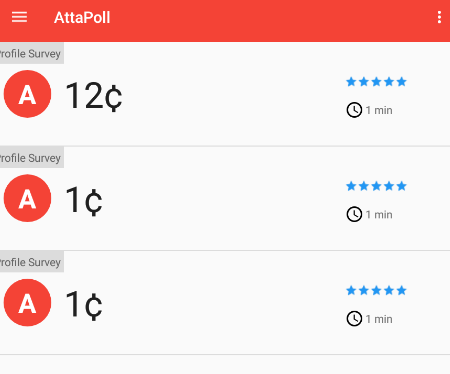 As you can see, it’s very straight forward.  It’s a list of surveys, which will include the type of survey, the survey rating (the more there are, the better your chances of completing it are), the length as well as your compensation.  Do keep in mind that when you first sign up, they will only send out profile screener surveys.  It’s important that you complete these surveys as it will allow them to learn more about you so that they can send you targeted surveys.

When you download the app, be sure to take the first three profile surveys.  They will only take you a few minutes, and in doing so, you can start to get survey invites.  If you don’t fill out your profile surveys, then nothing will change, unfortunately.

Now, when you finish these surveys, the number receive thereon after will greatly depend on your demographics.

For instance, right after I did the profile surveys, this is what my dashboard looked like: 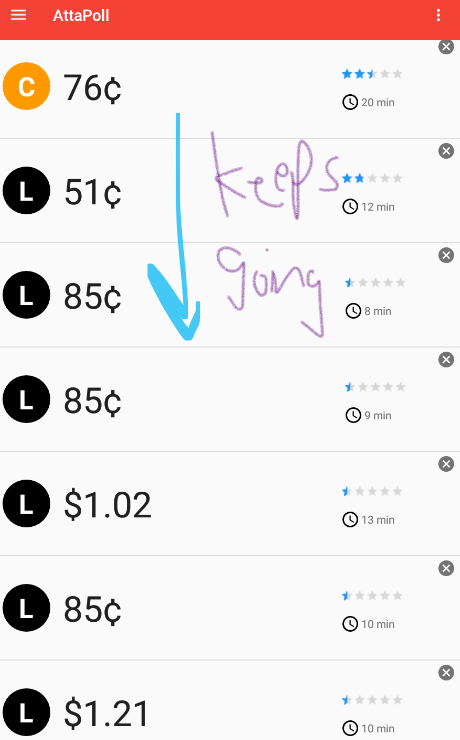 I checked every day for the next week and I always had surveys to complete.  So, I feel as if you can always have a survey to complete.

Now, the question is how many you will qualify for.  Remember, just because the survey is listed, it doesn’t mean you will qualify.  Again, based on your demographic, I would be prepared to qualify for about 10-20% of those you click on.  The nice thing about AttaPoll is that they will give you a penny just for starting the survey.

Aside from making money with the surveys, you can also make money referring your friends.  This can be said with many of the survey apps on the market.

For every friend you refer, it appears they will give you $0.61, but according to the terms, they need to complete at least three surveys within 30 days in order for you to get it.

While it’s nice to have a refer a friend system, I wouldn’t say this is the best one out there.

To cash out, you will only need $1 to $3 in your account.  This tends to be on the lower end when compared to the competitors, and how much you need depends on the payout method you choose.

If you choose to donate, you only need a $1, but if you want the PayPal option, you will need $3.  For Revolut, you will need at least $2.50 in your account to cash out. 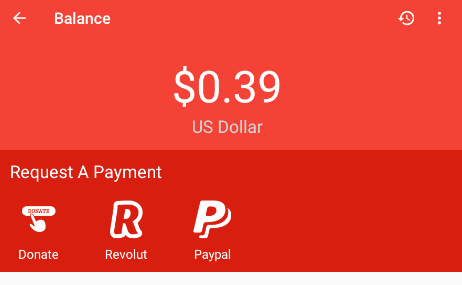 To request a payment, you can do so via PayPal or Revolut, which is a British financial technology.  If you don’t want the cash (hey, you never know), then you can donate your earnings if you choose to do so.  They used to have Bitcoin as an option but no longer appear to do so.

What Are the Reviewers Saying

The app has a decent 4.1 out of 5-star rating on the Google Play Store.  While this isn’t the best, it isn’t the worst, either.  Glancing at these reviews, here’s what I could pick apart in regards to the pros and cons. 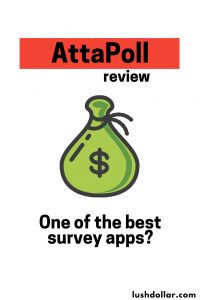 8/10I like the AttaPoll app.  It’s so simple to use, straight to the point and they have a ton of surveys available.  In using this app, I bet you could easily make $10 to $20 a week in your spare time.

In the end, I’m giving it solid remarks and I can now see why more than a million people have downloaded it.

If you’re looking for a survey app that’s simple to use and just pays out cash via PayPal, this is one to put high on your list. 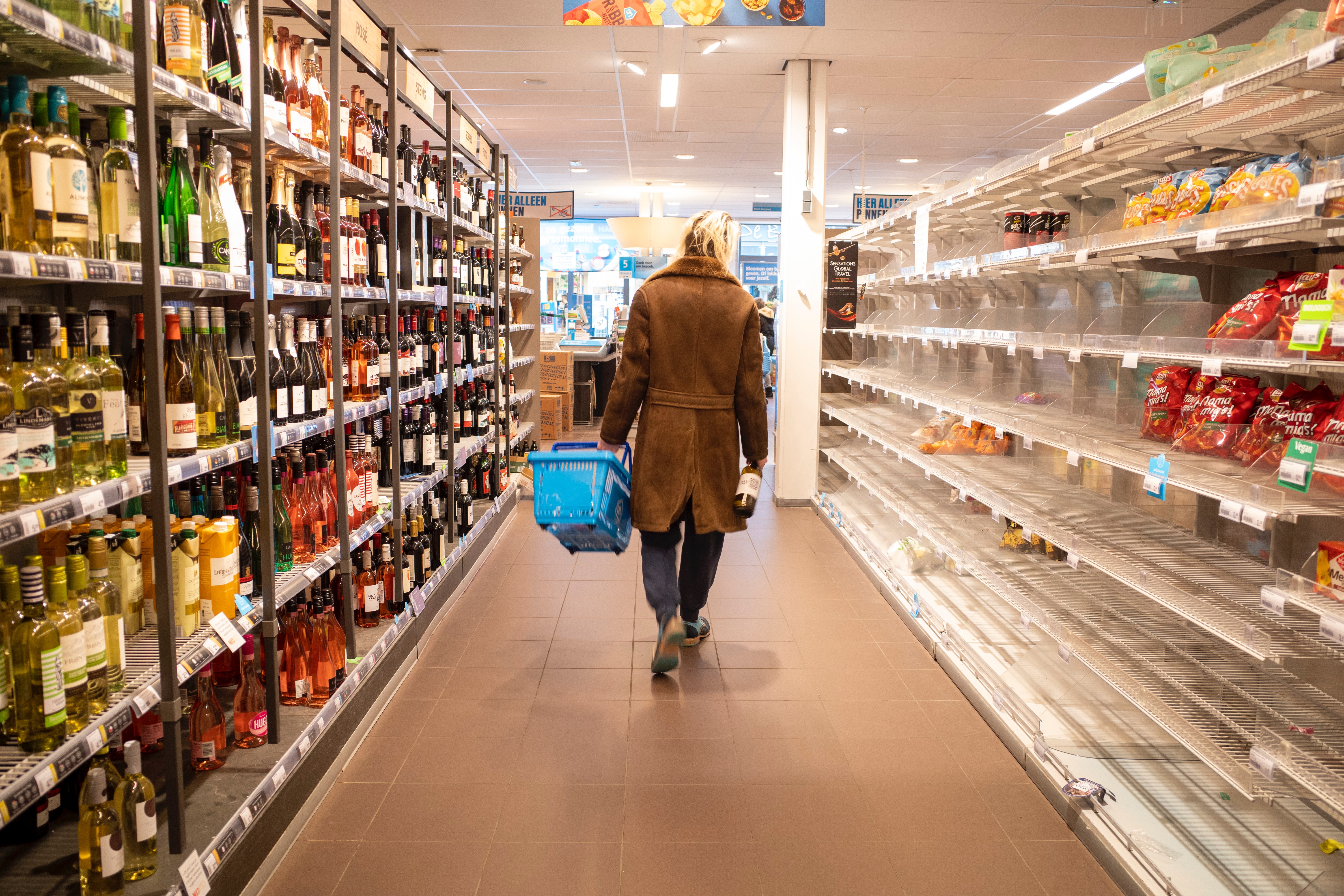 Mobee is a secret shopper app that rewards you to go undercover and shop as you normally would.  Answer questions while you shop and earn rewards.  It’s fairly simple, and you can do it as long as you have a...