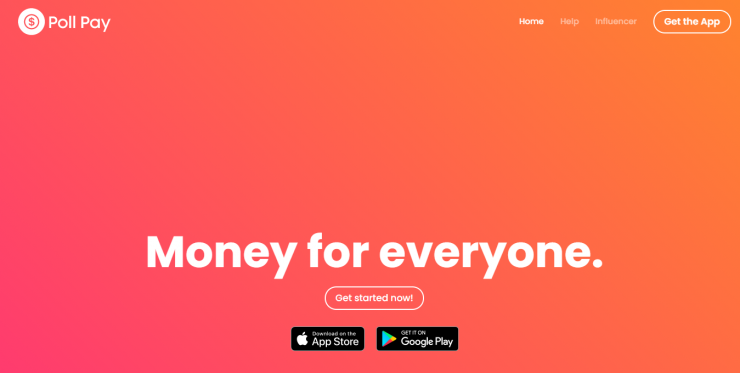 Poll Pay Review: Why Does It Have So Many Downloads?

The Poll Pay app is one of the most popular survey apps on the Google Play Store.  As I write this, it has more than one million downloads with a solid 4.6 out of 5 star rating and more than 100,000 people have graded it.  That’s a lot for an app.

Whether you already have a survey app on your phone or you’re looking for a way to make a few dollars a week, then the Poll Pay app may be something to download.  As in all of my reviews, I download the app, I test it out, and then report back to you as to whether or not it’s worth your time.  I only recommend apps I would use, I promise.  So, if you’re thinking about downloading it, I highly encourage you to at least browse through this before doing so.

Now, let me warn you first that these survey apps won’t make you rich.  Instead, you could make $5 to $10+ a week, maybe more, maybe less.  As long as you have this mindset, it can be a decent way to pass the time.   If you’re okay with that, let’s jump in and see what the Poll Pay app is all about.

What is Poll Pay?

The Poll Pay app’s slogan is “money for everyone.”  It’s like the many other money-making apps, where you can earn money completing surveys.  According to the company, surveys can be worth up to $10 and will take about 10 to 15 minutes of your time.

The app is operated by BitBurst GmbH, a mobile research firm based in Solingen, Germany.  Aside from Poll Pay, the company also runs BitLabs, which is designed to help monetize your traffic if you were to own your own website/app.  It’s a legitimate company, and yes, they do pay, so there’s no worry there.  They are as professional as they come in the research space.

Signing up for Poll Pay

To sign up for Poll Pay, you will first have to download it, either via the Google Play Store or iTunes, whichever phone you’re using.  At the moment, they only offer a mobile app and you cannot take the surveys on your desktop.

After you download the app, Poll Pay will then ask you to agree to their terms and then login via one of the three services:  Google, Facebook or Twitter.  This is mandatory and required if you want to use the app. 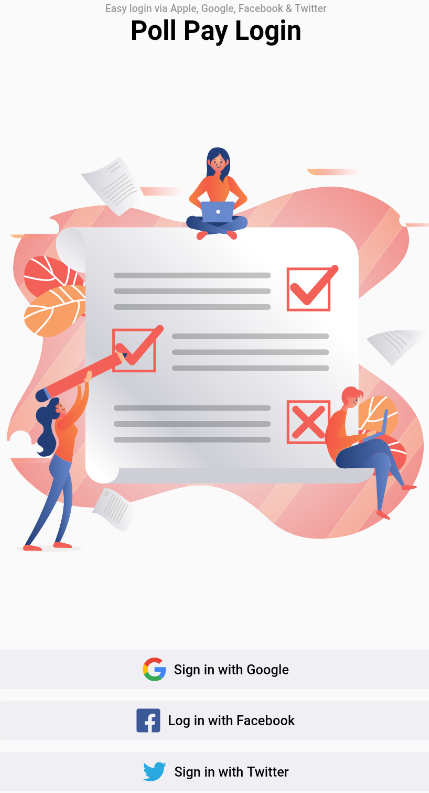 Unfortunately, you need one of the three accounts to sign up.  If you don’t have one, you can either create one quickly or you will have to skip out on this one and use another survey app.

Immediately after you connect your account, you can start taking surveys.  This is what your dashboard will look like: 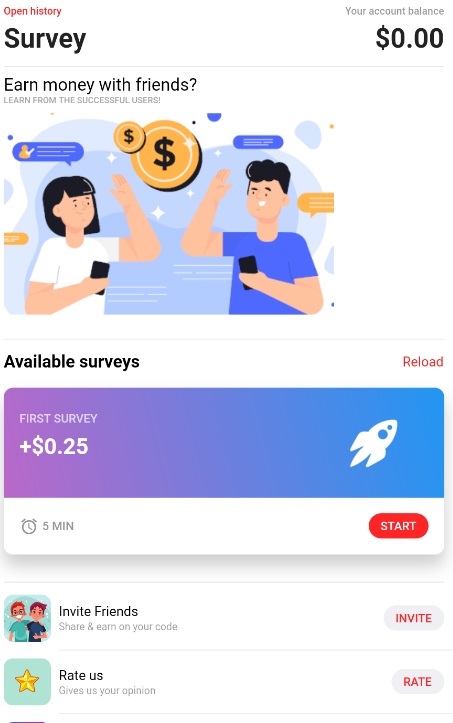 There’s not much to the app as all you can do is take surveys and invite friends if you so choose.

The minute you sign up, it will ask you to complete your first survey, which will pay you $0.25, and after that, you should see your survey dashboard update soon after.  For instance, after I completed my profile survey, this is what my survey dashboard looked like… 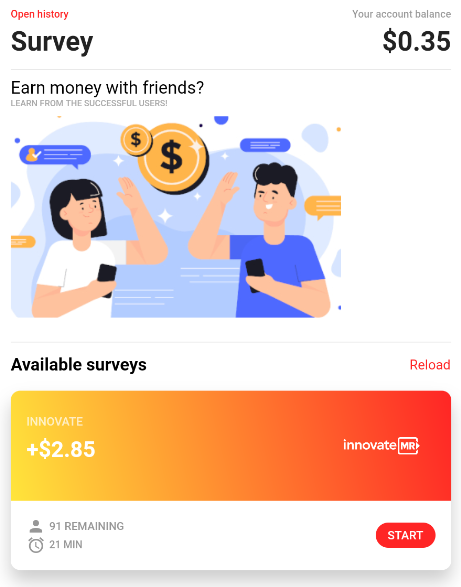 Answering those profile surveys are standard for survey apps and it’s almost mandatory if you want to start earning cash.  If you fail to do so, then your dashboard won’t update with the high-paying surveys.  These profile surveys only take a minute, so I encourage you to at least spend a few minutes to complete it.

After you complete that profile survey, you can continue to reload the surveys until you find one that’s of interest.  On each option, it will show you the payout, the number of openings remaining as well as how long it will take.  If you don’t like what you see, simply hit the reload button for another option.

This will greatly depend on your demographic, but from my experience, I always had surveys on my dashboard. However, just because there are surveys, it doesn’t mean you’re going to qualify for them.  I qualified for about two surveys for every 10 I clicked on.  Some surveys have a long disqualification process, whereas others will get you the boot in seconds.  It just depends on who you’re working with as some companies are much better than others.

I would expect to always see a survey, most of which come from various third-party offer wall companies, such as Pollfish, etc.  In short, the company uses other platforms to find surveys for them.

Poll Pay makes it easy, strictly paying cash so that you don’t have to worry about a silly points system.

Aside from making money with the surveys, you can also earn even more if you refer your friends using your code.

At the moment, the app will give you 15% of what your friends earn for life.  This is a very nice referral program in comparison to most survey apps out there.

To invite your friends, you will see the invite code near the bottom.  Just click on that link and you can then share your invite code.  Unlike most sites that give you a unique URL, your friends will have to enter this code manually. 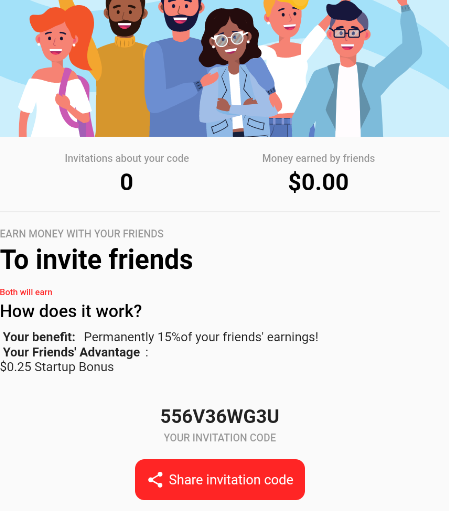 When it comes time to get paid, Poll Pay offers five reward options:

Every option, with the exception of PayPal, requires a $9.65 balance. PayPal requires $10.55.  It’s not the lowest minimum, but I wouldn’t say it’s the worse, either.  Let’s just say it’s in between. 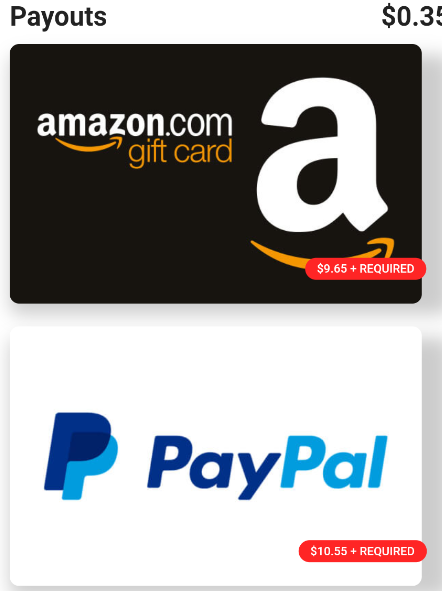 When you’re ready to cash out, click on your reward and confirm your reward.

If you have ever read any of my reviews, you may already know I like to include the pros and cons, most of which I gather from third-party sources.  Of course, every app will have its positives and negatives, so do take what you read with a grain of salt.  I always encourage you to do more homework if need be. 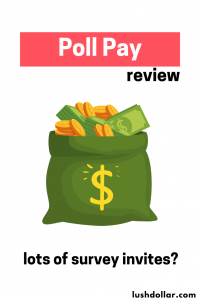 8/10The thing I like about Poll Pay is that it’s so easy to use.  Just load up your app and start taking your surveys.  There should always be something to complete as they work with so many survey partners.  If you like taking surveys and want a simple app, then this is one to add to your list.  There’s a reason it has more than 100,000 people who have given it a solid review.

Now, while you won’t get rich using the app, I feel you can make $5 to $10 rather easily if you log in every day and complete a survey.  Doing this should only eat up a few minutes of your time depending on the survey you complete.  This can be said about any survey app, however.  As long as you have this mindset, it’s fun to use.

As always, I leave the comment section open if you want to add your thoughts, whether it’s good or bad.  As long as it’s on topic, you’re more than welcome to vent!

WeAre8 is an app designed to “bring good back to social media.”  The company has zero tolerance for hate and wants to unite people in support of a better world.  The premise in itself sounds interesting and...

Survimo surveys is one I came across the other day when I was browsing the Google Play app store.  What stuck out to me was that they were poorly rated.  I’m talking a 2.2/5.  That’s pretty bad for a survey...