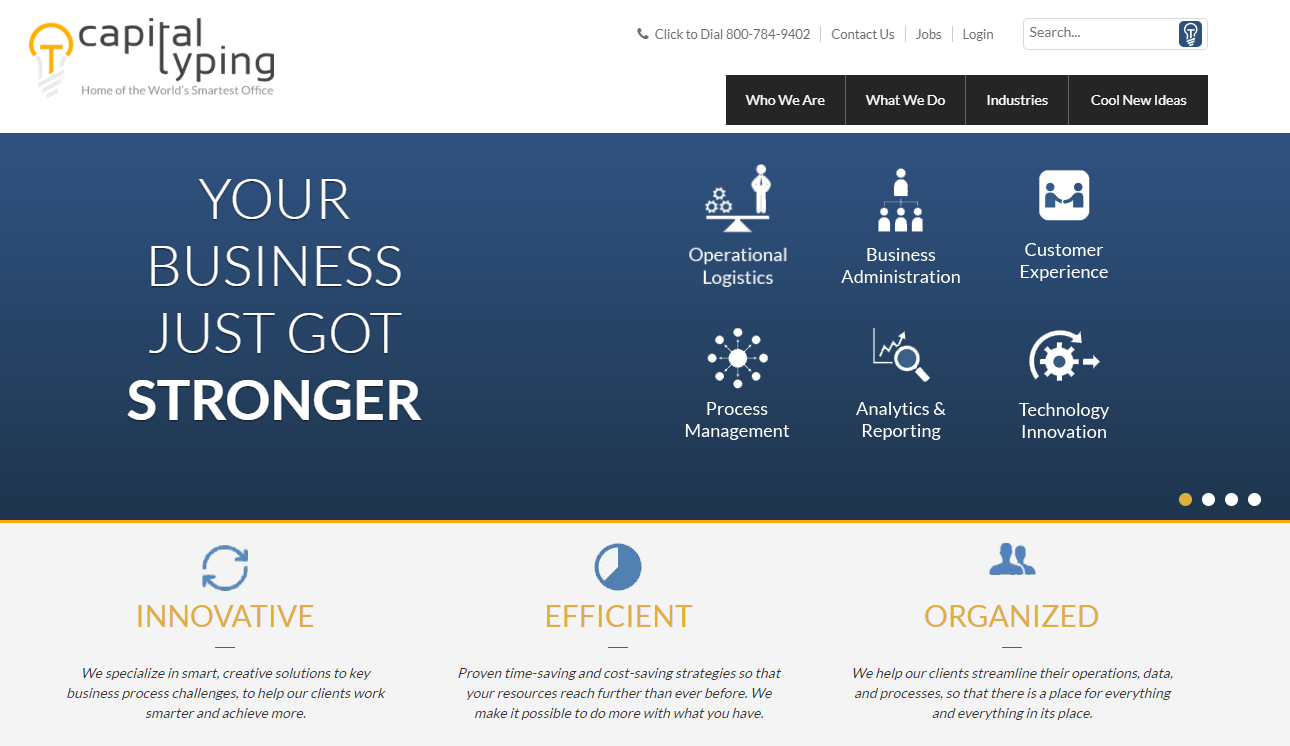 According to the company’s LinkedIn page, Capital Typing, Inc. is an outsourcing company that provides premium value outsourcing services and virtual office support, such as transcription services, data entry, online customer service and a language translation service.  These are all options I have mentioned in the past, and it’s a great way to make some money online; however, is Capital Typing a company you would want to work for?

Seeing there are a ton of options out there, I want to make sure that you’re applying to a company that actually cares about you.  We also want to make sure they aren’t scamming you as well.  That’s one of the main reasons I created this website.  I was sick of seeing all of the garbage online, from people promoting programs that only make them to money to being dishonest about a product.  I just don’t work that way.

With that out of the way, I wanted to quickly talk about Capital Typing and see if it’s a company worth exploring if you’re interested in any of the services mentioned prior.

What is Capital Typing?

Capital Typing was founded in 2002 by a group of consultants from South Carolina.  It’s an outsourcing company, as mentioned in the intro, that provides transcription, data entry, translation and online customer services.  It’s not a large company.  In fact, their LinkedIn page notes that they have fewer than 50 employees, so it definitely isn’t as large as the other companies I mention.  Granted, these are the employees and I don’t know how many freelancers they employ at this time.

Simply put, it’s a middle man of sorts that finds the work and then passes it on to you, the freelancer.  This is where you come into the picture.

If you’re interested in working with Capital Typing, they aren’t always hiring, but when they do, this is what you can expect.

The company only hires independent contractors, which means you’re paid by the “piece,” per se and not per hour.  This is pretty standard in the industry, but as a pro, you can work whenever you choose to do so, which offers maximum flexibility.  Upon completion, you will get paid on schedule, but I will get into that later.

For now, the company hires transcriptionists, data entry clerks, web designers, online customer service support agents and foreign language translators.  To learn more about what each service entails, the company offers a description on its website.

To see which jobs are open as of now, follow this link.  For example, when I did, the jobs you see above are what I saw.

Most of the time, they are almost always looking for transcriptionists and content writers, but the jobs mentioned prior can show up on occasions as well.

It appears that as long as you can pass the test instructions, they will be interested in hiring you.

Aside from passing the test and submitting this, they do ask that you submit a CV and salary requirements with Skype details.

If they do contact you, they will contact you with an application form to fill out in detail as well as to sign a non-disclosure agreement.  It is then when they set up an interview via Skype.

Again, there are no requirements per se, like so many companies ask for.  Instead, you will just have to show your skills via the application test.  It appears to be open to applicants worldwide at the moment, but this can change.  Please refer to the job requirements before submitting, however.

How Much Can You Make?

I couldn’t find much as the company doesn’t have a lot of details, but some reviews did uncover that transcriptionists can average about $30~ per audio hour.  This is audio hour, not hours worked!

Remember, you’re a contractor, so you’re going to work at your own pace and get paid based on what you submit.  So, the faster you work, the more you can get paid.  With that being said, you could make much more than the $30 or you could make much less.  It’s hard to determine.  One review said they were able to have this raised to a higher $36 per hour rate, so it doesn’t appear you can get raises.

Generally, as long as you can type 50+ words per minute, you should be able to make at least minimum wage.

As for the pay, the company pays bi-monthly via PayPal.  You are responsible for invoicing the company and then waiting for the payment those two days a month.  There seem to be no troubles here.

As in all of my reviews, I love to see what other people are saying.  It kind of gives me an idea as to whether or not the company is worth your time.

On Glassdoor, there were only two reviews, one being a 3/5 and another being a 1/5.

Here’s what they had to say:

7/10Capital Typing is a legitimate company, and it seems to be one to at least check out if you’re interested in transcribing mainly.  The application process is easy and you only need to submit a file to be considered.  The rates seem to be fair, and for the most part, there’s not much to complain about.  Of course, your results will vary.

If you do apply, don’t expect much in terms of pay, maybe $10~ per hour after everything, maybe more, depending on how fast you are.  Nonetheless, it’s one of the many companies out there that can help you earn online.

Remember, Capital Typing isn’t the only player in town as there are a ton of companies that can pay you much more than they can.  I encourage you to check out that post to see if any of those companies are of interest to you.

As always, check out my YouTube channel for other ways to make/save money as well as the website.  To date, I have hundreds of honest guides to help you earn money online.