Clear Voice Surveys Review: Why You Should Skip

ClearVoice Surveys pays you to take real surveys from market research companies.   Yes, it’s one of the many companies out there, but the question is if it’s worth joining.  As there are hundreds of survey companies online, it’s hard to distinguish which ones are considered to be the best.  I can understand that pain.  While I have done a ton of research in this regard, I have only have found a select few to be worth joining.  While some companies can be legit, it doesn’t always mean they are worth the join as they may not send as many survey invites as you expect.

In today’s review, I check out ClearVoice Surveys.  I join the panel, I let you know how it works as well as what you can expect to make.

As in all of my surveys, I remain 100% honest and only promote what I feel is ethical.  With that being said, let’s dive in and check it out.

What is ClearVoice Surveys?

ClearVoice Surveys pays you to take surveys and share your opinions about the products you may already use.  This is straight-forward.

However, if you look at the main site, I didn’t see much as to who they were.  While the company’s website looked legitimate, I wanted to know if the company behind the scenes was legitimate as well.  All I could find was that it was operated by “ClearVoiceSurveys.com, LLC,” and this was posted on the terms/condition page.  Searching this name, I did find that they were based in Colorado and they had an A+ BBB rating, but the customer reviews were okay.   This was a good start, to say the least.

Remember that most companies don’t always talk about their history on the main page.  Rather, they focus on the product, and that’s okay.  At first glance, ClearVoice Surveys seems to be legit, but again, the question is if it’s worth joining.

To sign up as a member of ClearVoice, the company asks for the usual, such as your email address, a password as well as some personal information such as your address and phone number.  This information may seem personal, but honestly, most companies ask for this information so that they can match you up with appropriate surveys. 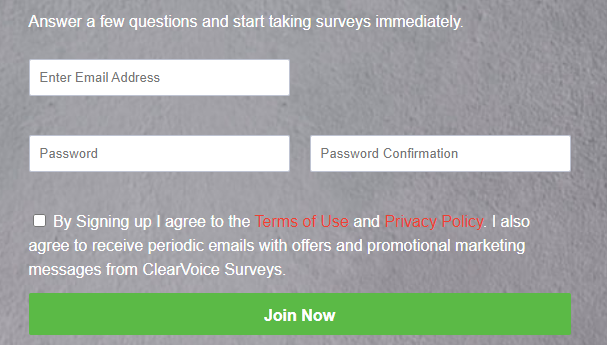 The sign-up process takes about three minutes at most to complete, and you need to be at least 13+ years old.  The company does allow international users, so it’s not limited to just the United States.  However, in most countries, outside of the U.S. And Canada, you will find that your options are limited.

You Need to Fill Out a Basic Profile

After you fill in your information, the company then proceeds to ask you a bunch of questions in regards to your employment, what you purchase, etc.  Again, this is commonplace, but some companies require that you fill it out, whereas some make it optional.  In this case, ClearVoice requires that you fill out the basic information, again, so that they can match you up to the appropriate survey opportunities. 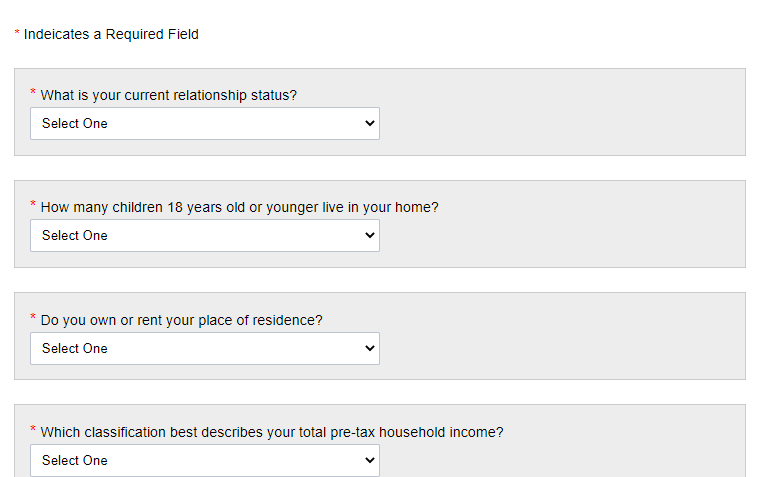 This was a downfall to me as it took at least 15+ minutes to complete this and they didn’t compensate me for my time.  It’s a mixed bag as to who does and doesn’t compensate, but it would have been nice to at least receive a few points for doing this.

After you fill out your profile, the company will send survey invites to your email as well as post any opportunities on your member dashboard.  And, like most survey companies, the number of surveys you get will depend on your profile, the one you filled out earlier, so it’s very important that you fill it out accurately so that they can do the best to send you a survey.  As long as they have the clients, surveys will be sent out.

Unlike Swagbucks and Survey Junkie, which send out a TON of invites every day, this isn’t the case with ClearVoice.  In my personal research, they send out only a handful every month, and you’d be lucky if you get that.

How much do they pay?

This is another bummer as they only pay about $0.50~ on average per survey, which tends to be below average for survey companies.  However, you may find a survey that pays more than this or even less.  The company only pays out in cash, not points.

At the moment, the company only offers an Amazon gift card code as a reward option.  This can be seen as a downfall to some if you’re looking for a cash option.  This is subject to change, though, but I can’t see it being anytime soon as this has been the only reward option for quite some time now.

And, to cash out, you will need at least $10 or more to do so.  Once you do, the code will be sent to the email on file.  This can take up to six weeks.

In all of my reviews, I like to search online to see what other people are saying, and honestly, it wasn’t good.  SurveyPolice members gave it a poor 2/5 rating while BBB members gave it the same rating.

Among the complaints, people said the following:

As for the good, here were a few things mentioned:

3/10While ClearVoice Surveys is legit, I wouldn’t sign up.  The surveys are few and far between, they don’t pay much, and worst of all, it can take 6+ weeks to receive your reward.  Are you kidding me?

If you want to take surveys, stick to the much more reputable sites such as Swagbucks and Survey Junkie.  You can also check out this post, best survey apps, to see the many survey opportunities.  Searching for “surveys” above can yield results as well.

In the end, there are much better options.  If you do sign up, you won’t get scammed.  Again, it’s legit, but I think you will be disappointed in the offerings.

As always, if you want to comment on anything mentioned or maybe you have a question, you’re more than welcome to sound off in the comments below.