E-Rewards Review: Here’s How to Join (Invite Only)

e-Rewards is a market research panel where you can earn “e-Rewards currency” in exchange for answering survey questions.  It’s one of the first survey panels I have ever joined, and I occasionally use them today.

Founded in 1999, it’s operated by the very reputable market research firm, Dynata, and has more than two million members to date.  It’s a reputable survey panel, but the question is if it’s worth joining?

If you’re part of another company’s loyalty program of sorts, you may have received an e-mail invite, asking you to join this community.  And, in exchange for joining, they may have said you could earn points for answering these surveys, in which you can redeem for the said retailer.  It sounds good, but is it?

In today’s review, I will show you how e-Rewards work, if it’s worth joining, and how much you can expect to get paid.  I will also talk about how you can join if you’re interested in getting on board.

If you want to earn loyalty points, let’s take a gander at what e-Rewards is all about.

Generally, as long as you’re part of one of the following loyalty programs, you should get an invite sooner or later:

For example, when I joined the IHG loyalty program years ago, I received an email about a month later after I signed up.  The same happened when I joined Hilton as well.  Seeing that these loyalty programs are free to join, sign up for one of them and just wait for a few weeks.  Generally, the invites come in like clockwork.  Just be sure to look for an e-mail subject asking you to join the e-Rewards panel.

Once you get accepted, the survey panel will look no different than any other survey panel if you have ever been part of one.  This is what your dashboard will look like: 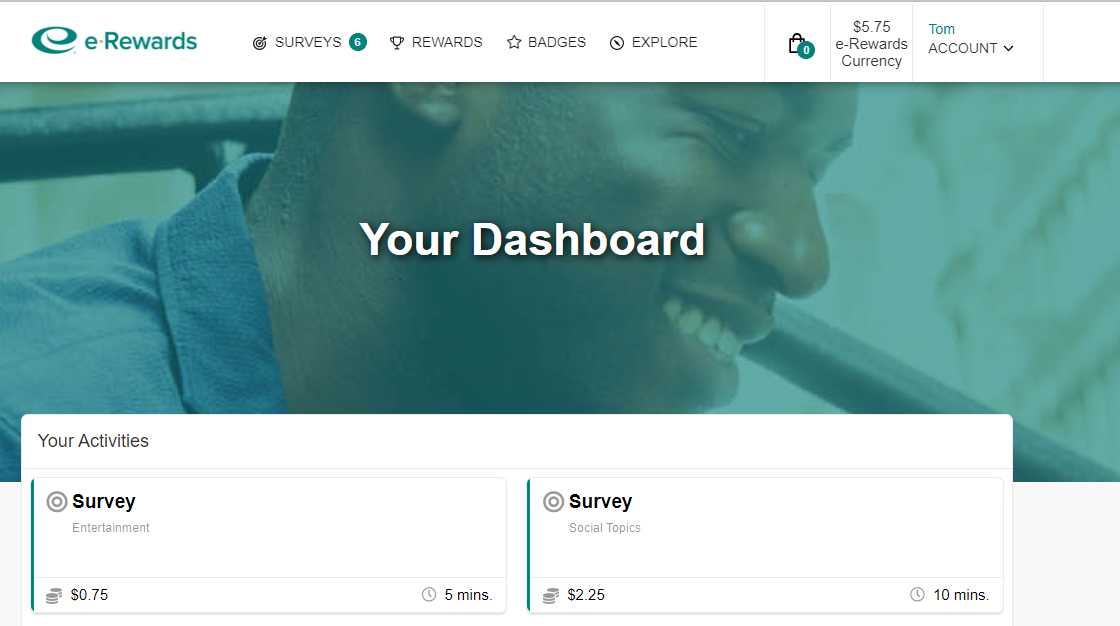 The company only focuses on surveys, paying you in e-Rewards currency, in which you can cash out for a variety of rewards, including gift cards, miles, hotel points and even free magazines. I will get into this more in detail later on in this guide.

For now, this is where you can earn your points.  Just click on a survey of interest, complete it and then get rewarded for your time if you complete it.  As with all surveys, just make sure it’s worth your time as some surveys can take 20-30 minutes.  You wouldn’t want to complete a 30-minute survey to only make $1.  My rule of thumb is as long as you’re earning about $1 per five minutes, you’re doing a good job.

As time goes, e-Rewards will email you survey invites, but you can log into your dashboard whenever you please as well.  Surveys always seem to be there.

How Many Surveys Can I Take?

This question is always asked whenever I do a review like this, and the answer is tough because it will greatly depend on your demographic.  Generally, your middle-aged female/male with two kids and a $90,000 income will do much better than an 18-year-old making $12,000 a year.

With that being said, I always say invites on my dashboard, but it doesn’t mean you will qualify for all of them.  As a general rule of thumb, be prepared to qualify for about 10 to 20% of them.  Nonetheless, e-Rewards will keep you busy as it’s networked with Dynata, one of the larger research companies.  With this sort of power, they have a lot of connections, meaning a lot of surveys for you.

The best way to receive more surveys is to make sure you complete your profile.  The company uses a badge system, which rewards you with “badges” as you fill out your profile.  Tiers include the silver, platinum and diamond member level.  While the badges won’t earn you more money, per se, it can help you earn more survey invites.

Most of the surveys you complete on the platform will range anywhere from $0.50 to $5+ in e-Rewards currency.  Like most survey sites, these surveys can take you anywhere from five to 25+ minutes to complete.  Just make sure you take a glance at the survey information before you click on it to make sure it’s worth your time.

In the beginning, however, they will make you answer profile questions if you don’t answer them at first.  This can be annoying, but it is necessary to receive targeted survey invites.

The nice thing about e-Rewards is that they will give you a partial incentive, even if you disqualify, so technically, you will always earn at least something.

Well, how much can I earn?

The thing about the e-Rewards currency is that $1 in e-Rewards cash does not equal $1 in value.  Rather, every $75 in their currency equals about $25 in cash value if you were to cash out for a gift card.  As for points, the value will depend on which option you choose as each company has varying point values.  It’s more of a mind game because it makes you feel like you’re earning more when you take a survey, but in reality, you’re not earning nowhere near what you think.  That $5 e-Rewards currency survey you may take, for example, is only worth $1.65 in gift cards.

To be safe, every dollar earned here is only worth $0.33 in rewards value.  This isn’t always the case, however, as sometimes, the points can be worth more if your reward is on sale  It’s annoying to do the math, but some companies do this to play more of a mind game with you. 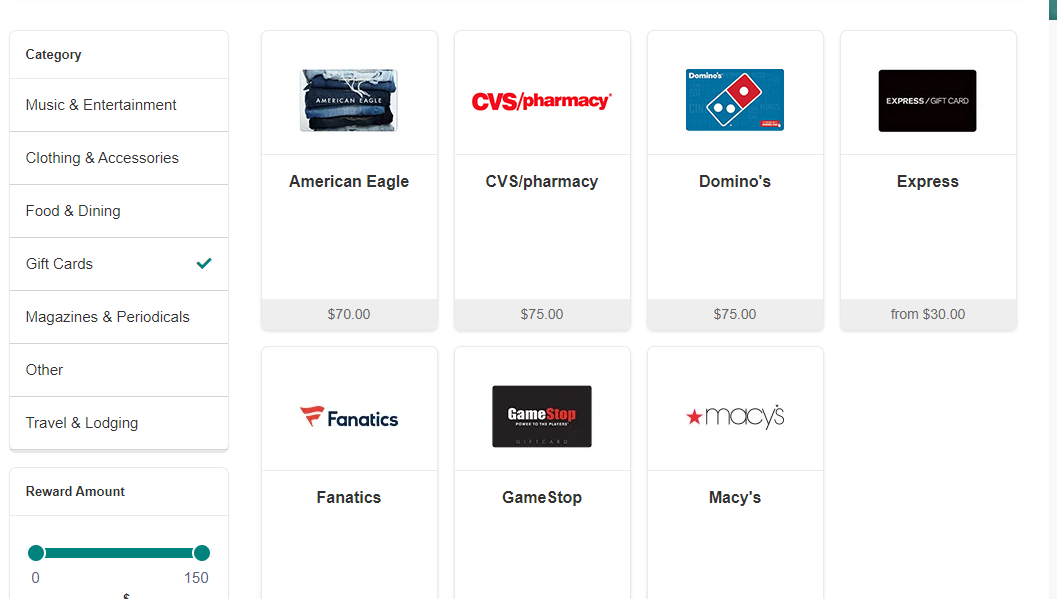 When it does come time to cash out, e-Rewards offers a variety of rewards, most of which include gift cards, loyalty miles/points and magazines.  At the time of this review, here’s what they were offering:

Keep in mind that this is subject to change, but over the years, it hasn’t changed all that much.  Usually, most people who join are only interested in the loyalty points, which are transferred to their account.  But, what you cash out for is completely up to you, of course.

Once you cash out, online vouchers can arrive in about 24 hours, whereas physical rewards, such as a magazine, can take up to six weeks.

What the Internet Is Saying

In my research, here’s what I found about e-Rewards, both good and bad.

The thing I like about them is that they are backed by Dynata, a very reputable market research firm.  In fact, it’s one of the largest in the field, which generally means you can get a lot of survey opportunities. I have found many of their surveys to be much more enjoyable than some of the competitors.  They seem to be shorter and I qualify for more.   The only thing I didn’t like is that their rewards seem to be meh.  They don’t have the typical favorites, such as Amazon or PayPal, so instead, you have to resort to one of the many I mentioned above.  While there are some okay choices, many people prefer the cash option, and I don’t blame them.

In the end, e-Rewards is can go either way.  I’m not going to recommend them heavily nor will I say to steer clear.  They have a lot of surveys and you can earn some decent rewards such as magazine subscriptions and loyalty points if you don’t want to buy them, but other than that, if you’re looking for gift cards, you can do much better.