Ipsos i-Say Review: Here’s What I Found Out

Ipsos i-Say is an online survey rewards community said to “give you a voice.”

In exchange for completing surveys, Ipsos i-Say will reward you with points as a thank you for your feedback.  The more surveys you take, the more you can earn, in which you can then cash out for a variety of rewards, all of which I will get into later on in this review.

Much like some of my favorite survey websites, such as Survey Junkie, Ipsos i-Say works in the same way, so if you like the idea of taking surveys only and getting rewarded for your time, then let’s dive in and see if it’s really worth your time.

What is Ipsos i-Say?

Before I even dive into the review, let’s first explore the company’s background to see what they are all about.

According to the company’s official website, Ipsos i-Say is a global research company that provides a fresh perspective on the trends of today.  Owned by research professionals, the company conducts more than 70 million interviews a year with more than 5,000 clients.

Founded in 1975, the company is said to be one of the top three largest survey-based research firms in the country with more than 15,000 employees and 3,000,000+ members.  By far, this is one of the largest research companies I have ever researched.

All in all, the company is, indeed, 100% legitimate and quite large, but the true question is if it’s really worth your time joining?

Signing up for Ipsos I-Say

Before you sign up, all that Ipsos i-Say asks is that you’re at least 18 years old and reside in one of the many countries on their approval list.

From the looks of it, they do accept quite a few members from all over the world, aside from the typical United States, Canada, and UK members.  Looking at the list, they accept members from a wide variety of countries, so I do recommend you at least check out the list before applying, but there’s a good chance they may accept your country.  This is a great option if you’re finding yourself getting denied because you live in a foreign country often not accepted.

As long as you’re 18+ and reside in an accepted country, then I found the signing up process to be quite easy.

At first, they ask for your email and a password, and once you confirm your email address, you will then be asked to fill out a small questionnaire, basically telling them a little bit about yourself.  If you have children, you will also be asked about them as well since many surveys often revolve around children activities.

All in all, the process took maybe five minutes and was extremely easy to start accessing your paid survey opportunities.

NOTE:  Unlike most survey companies that accept almost anyone, Ipsos I-Say isn’t always open for newcomers.  Don’t be surprised if the company denies you access.

If you’re accepted to Ipsos, then you will be able to access your dashboard immediately, which will look something like this:

The nice thing about Ipsos i-Say is that they focus on surveys only.

So, in short, this means you don’t have to worry about silly offers, video watching or surveys that seem scammy.  While there’s nothing wrong with these other ways to make money, it’s just that surveys often pay out the most and are the easiest to complete.

As this is a legitimate company, all of the surveys that are provided to you will pay you the points mentioned, however, like most survey companies, you do need to qualify for the survey in order to be rewarded.

As you can see, the dashboard is extremely straightforward and extremely clean.  It’s very easy to browse around, and basically, you can just view the surveys you may qualify for.

Just click on the “Start the survey” link, qualify and you get rewarded with the points specified.  Again, you do need to qualify, but if you don’t, they will give you five points for at least trying.

Most of the surveys work in the same way in that it will start with qualifying questions, and if your answers meet the criteria, then you can continue on to take the survey in its entirety.

According to the official FAQ, the number of surveys you receive will depend on your profile, much like other survey sites.  On average, plan on receiving at least eight surveys a month, but you could receive more than this, again, based on your demographic profile.

Aside from surveys, Ipsos i-Say also offers an opportunity to participate in what’s known as polls, and you will have the opportunity to take part in this “contest” every time you finish a survey.

In short, Ipsos i-Say will allow you to play a predicting game, wherein you can guess the percentage of people who will answer yes to various polls.

For example, one poll may ask you a sample question such as if you would help a stranger on the side of the road?  If you said 25% said yes, and you guessed close enough to the final result, then Ipsos i-Say would give you a certain amount of entries.  Just picture it as a fun way to win some cool prizes.

And, if you get it right, then Ipsos i-Say will give you entries to its sweepstakes, wherein you get chances to win large prizes such as Amazon gift cards, cash, etc.

In addition to the surveys and the fun polls, Ipsos i-Say will also reward you with loyalty points for every survey you complete.  The more you complete, the more points you can earn throughout the year.

Based on a tiered system, each time you complete a certain number of surveys, they will automatically reward you with bonus points.

As of this review, here’s the breakdown of the loyalty points you can earn:

Now, keep in mind that the program runs from January 1 – December 31 each year, which simply means the number of surveys you take through the year will not carry over to the next, so do keep this mind.  Once January 1st hits, your “number of surveys” number will reset.  Do keep in this in mind when trying to snag those loyalty points.

I know you’re not taking these surveys for the heck of it, so in this section, I’m going to talk about how the surveys work.

Like a lot of survey websites, such as Swagbucks, they often use a points system, which can be annoying to some, I get it.  Ipsos i-Say does the same thing.

All in all, though, one point equals about one penny in value.  If you looked at the dashboard example provided prior, then that 90 point survey would be worth about $0.90.  You just need to ask yourself if it’s worth completing.

And whether you want cash via PayPal or an Amazon.com gift card, the company offers quite the variety.

In fact, as I write this, they had gift cards for all sorts of retailers, including Target, Walmart, Starbucks, Sephora, Playstation and so many more.  You can view all of the rewards by clicking here without the need to register just to see what they have to offer. 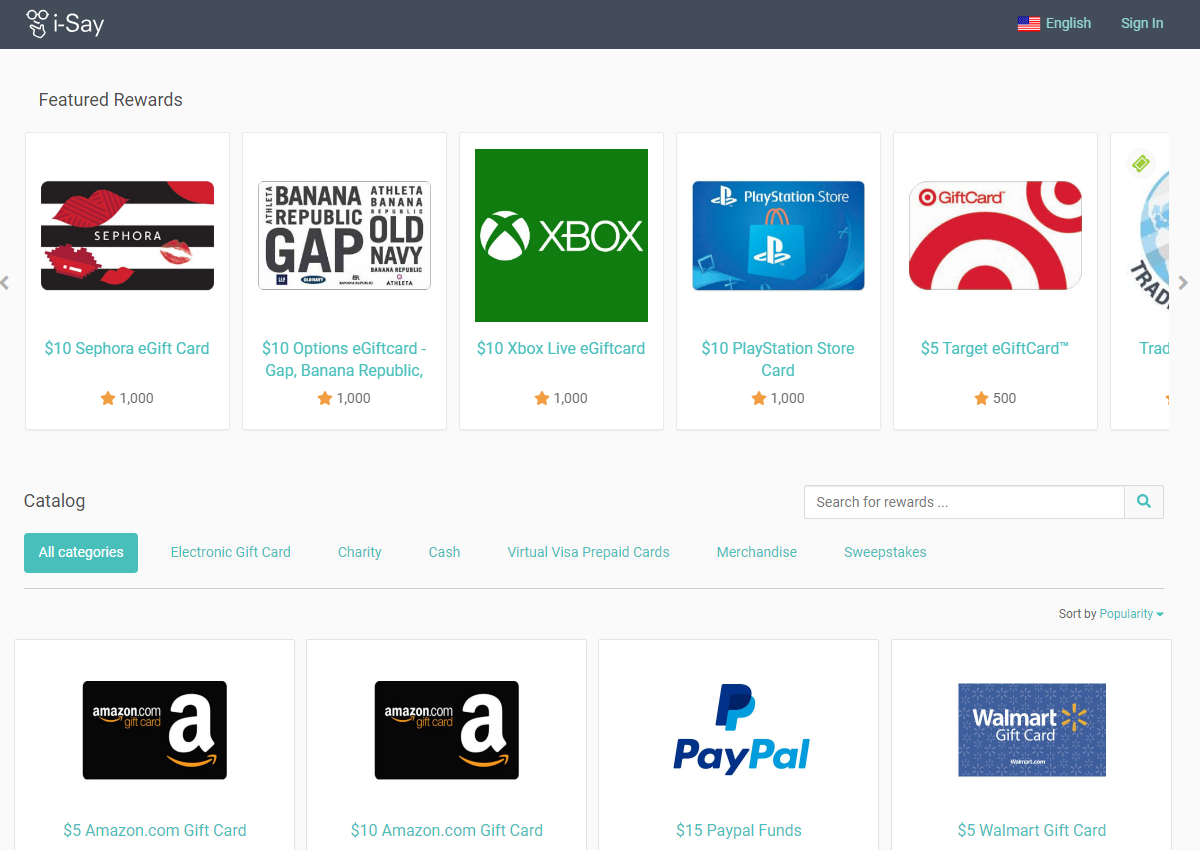 The rewards are quite good, so whether you’re looking for cash, an Amazon.com gift card or a particular retailer, there’s a good chance they will have it.

Once you’re ready to redeem, the company asks that you wait up to three to four weeks for delivery, all depending on what you choose.

What Others are Saying

As with all of my reviews, I combed the web and included what other people said about Ipsos I-Say, both good and bad.

Take it with a grain of salt as I couldn’t confirm everything, but I did try to include anything I found people saying quite a bit online, all of which you can look at below. 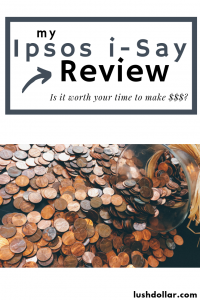 All in all, Ipsos i-Say is a very reputable research company, and if you’re lucky enough to get accepted, I would at least say join and wait for the email invites to come in and/or just make it a habit to check your dashboard to see what’s available.  Just consider this as a small survey site to do in your free time.  You’re not going to rich nor are you going to be able to do surveys daily.   Please keep this in mind.

And depending on your demographic, you may find it easy to get qualified for surveys, but in some cases, you may find it frustrating to get denied for everything.  It’s really a luck of the draw as these companies are often looking for a particular person, so if you don’t fit the mold, they will deny you.

In the end, at least from my research, I would say you could make about $10+ a month if you’re quite active.  I know it’s not much, but it could be more, again, if you qualify for a lot of these surveys.  As mentioned, I like it as a little side job that you could do for a few minutes every day.

If you want to make much more than $10 a month, then I highly recommend Swagbucks as the surveys here seem to be never-ending.  I easily make $200+ a month with their platform and don’t see why you can’t.  You can make much more if you dedicate more time to it.  Of course, you can add Ipsos i-Say into the mix as well to make even more.

7/10You’re not going to get rich doing this, but it is a fun way to make a few bucks on the side, the main reason I’m giving the company a solid 7 out of 10.  The only reason for a slight downgrade is due to the fact that they don’t always accept new registrations and the surveys can be few and far between for some.  The rewards can take quite some time to show up as well.

Regardless, at least attempt to join and test it out for a month or so to see how successful it is for you.