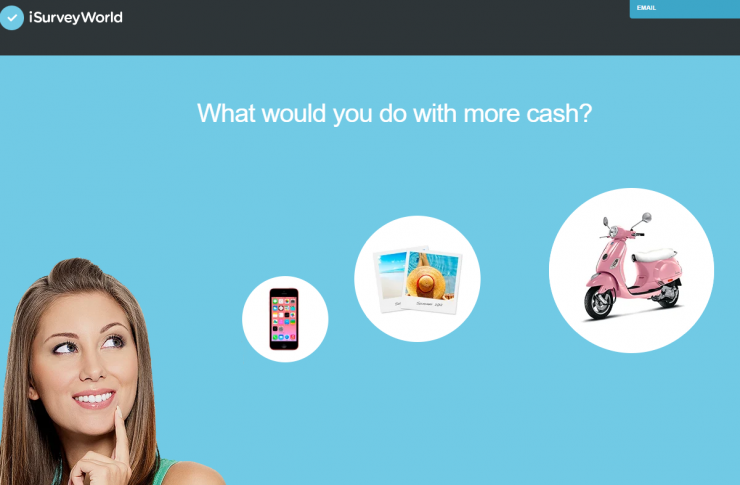 iSurveyWorld is yet another survey site online that will reward you for your time.  And, while there are a lot of these options out there, you have to wonder if this one is worth joining.

I haven’t mentioned it before, but I have come across it a few times in my research, so I felt I would look into it to see if it’s worth joining.

As in all of my reviews, I always sign up and then let you know what the process is like.  In the end, I share my thoughts as to whether or not I would use them in the future.  I’m always honest, no matter what kind of relationship I may have with the company.

So, if you want to make a few dollars on the side, let’s jump in and see if iSurveyWorld may be for you.

On the official site, I didn’t see an about us page, which is often a red flag to me.  The only thing I could find out about the company is that they were based in Woodland Hills, California, at least according to this BBB profile.

The main page boasts that you can earn cash for every survey you complete as well as “earn money anytime from anywhere.”  This is a fairly standard claim for most of your survey-like websites.

Aside from the non-existent about us page, another thing that concerned me was the outdated copyright date.  While I was writing this, it was 2020, but the copyright noted 2013, a seven year difference!  If it were only a year or two, that’s fine, but when it hasn’t been updated for more than seven years, it made me wonder if this company was even in business still.  I guess I’m about to find out.

Signing up was pretty standard as you could do it right from the main page.  You just have to enter your email, name, address and a few other personal details, as seen below… 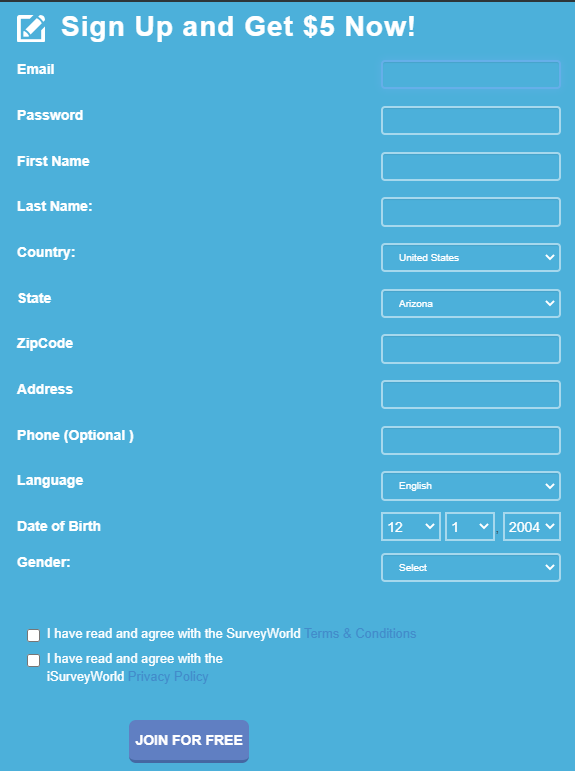 The cool thing about signing up is that the company would give you $5 just for doing so, but I’m unsure of how long this bonus will last.

The entire sign-up process took three minutes at most, and it’s 100% free to join.

To qualify, you must be at least 18+ years old.  As for country restrictions, the list, at least according to the registration form accepted almost anyone, which is a rarity in the survey world.  This isn’t in writing, though.  Just remember that just because you can join in your country, it doesn’t mean you will get a lot of survey invites.  In some countries, survey options are very limited, even if you’re able to join. 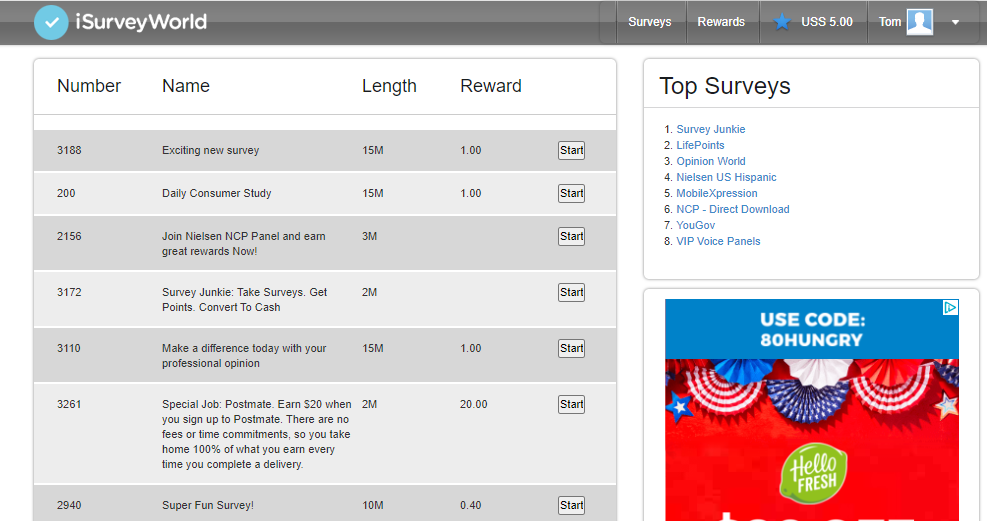 As you can see, it’s fairly straight-forward as the company just lists all of the ways you can make money in one place.  Unlike most survey companies that categorize the ways to make money, they just list it as one, making you comb through the jobs to see which one works for you.

Next to each job, you can see a description as to what the job is about, how long it will take as well as how much you will get paid.  If you don’t see a job reward, this means you won’t get paid and isn’t considered a survey in a sense!  Most of the survey jobs I did see, however, paid about $0.30 to $1~ per survey at most and were very random.   How many surveys you do get will greatly depend on your profile demographic as well as which country you reside in.

When I took a gander, there was nothing of value here.  In fact, most of what I did see were referral links to other survey providers that I commonly promote.  Sure, some of these companies are good, but what does it do for you?  You want to make money, right?  The lesson here is don’t expect a lot of survey invites as you would with the bigger name players.   I have heard that surveys do pop up, but they can be at random.  Your results will vary!

This list could change, sure, but when there are only five or six opportunities to make less than $1, it’s not that motivating to keep logging in to make some cash.

iSurveyWorld makes it easy to redeem your rewards as there is only one option — PayPal.  The only downfall, however, is that you need at least $25 to cash out, making it one of the higher minimums in the industry.

After you hit $25 in rewards, you can click the “redeem here,” which is spelled wrong, but it doesn’t mean you will get paid.

Remember, if you sign up for the first time, they will give you $5 just for joining.  This is a bonus similar to the very popular Swagbucks, one of the leaders in this space.

Once you cash out, it may take up to four weeks before you see your payment.

As in all of my reviews, I love to see what the internet is saying.  It’s not all about me, after all, right?

Yes, the company is 100% safe and legitimate, but just because it’s safe, doesn’t mean it’s worth joining.

If you do decide to join, that’s great, but just be aware that your survey invites will be at a minimum and it could take quite some time before you see that $25 minimum balance.

2/10In the end, I don’t recommend iSurveyWorld.  It just seems to be outdated and it looks as if they are making no efforts to update their offerings.  There are so many better options out there if you’re looking to make $1, $5 or even $10 a day.  I would start with the 43+ survey companies that pay via PayPal and the 26+ best survey only apps to find the many legitimate companies that can keep you busy for a while.  You can also search for surveys as I have written extensively about this very topic.

While the company will pay out, it may take an eternity to reach that $25 minimum.  Your time is better off spent elsewhere.  It’s not a scam, per se.  It’s just not worth your time.

Now, as always, I leave it up to you.

Have you joined iSurveyWorld in the past or are thinking about joining?

Feel free to leave your comments below!