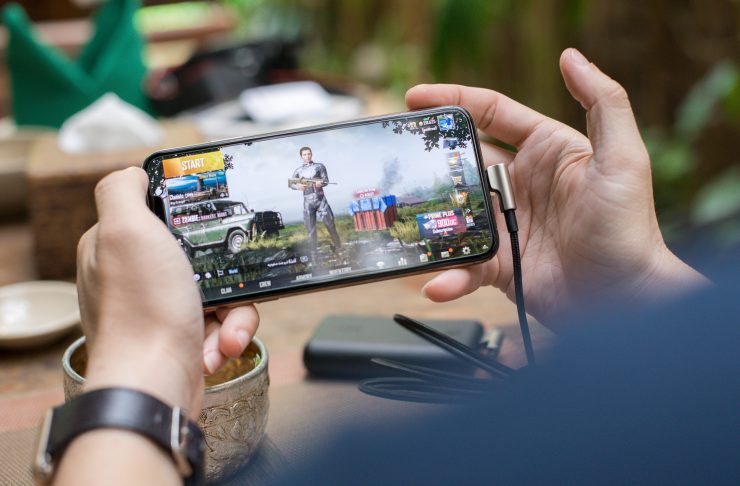 PlaytestCloud Review: Get $9+ to Play Games?

If you want to get paid to play video games, then PlaytestCloud is a name you may have heard of.  It’s one that’s reputable, but the question is if it’s worth your time.

In today’s review, I signed up for PlaytestCloud to see how it works, what you can make as well as what other people think of it.  As in all of my reviews, I’m 100% honest and would never recommend something I wouldn’t use myself.

So, if you like the idea of testing games and getting paid, it’s a review to stick around for.

In short, it’s a company that allows game developers to help learn more about their game before it’s launched.  Picture it almost like a beta testing platform of sorts, in which you give your feedback after playing the game.  Once the developer gathers enough feedback, they can then make any changes they feel are necessary.

Most of the games you find on this platform will be mobile or browser-based, and all you need to participate is a phone, tablet, and/or PC.  The company was founded in 2012 and has worked with many popular gaming brands such as Ubisoft and Wargaming Mobile, to name a few.

PlaytestCloud, as mentioned, works with many reputable game developers and has a decent reputation online.  While you won’t make a ton using the platform, you can make some money in testing new games.  And, yes, you will get paid if you do everything as noted in your job outline.  Check out the many users on this Reddit thread, for example, that stated they were paid for their work.

While the company is legit, however, it always doesn’t mean it’s worth your time.

If you want to become a beta tester with PlaytestCloud, it’s as easy as filling out a form found here. 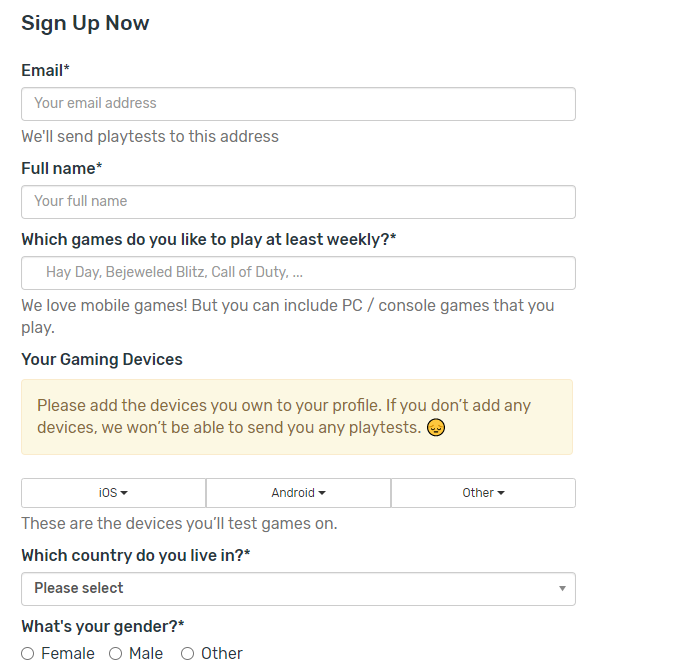 During this registration process, they will ask you for your name, the type of games you play weekly as well as the gaming devices you own.  It’s not much, and it will only take you about two minutes to complete.

They do ask that you reside in either the United States, United Kingdom, or Canada, but you can apply if you live outside those three.  However, keep in mind that most of the developers they work with are from the three mentioned countries, so you may find yourself with a limited number of invites.

Once you sign up, you will be asked to watch a qualification test video as well as complete a qualification test.  During this quick five-minute test, you will be asked to play a sample game while speaking your thoughts aloud.  This will teach you how the platform works as well as let the website know what kind of tester you are.  Generally, they are looking for people who can speak coherently while playing and put their thoughts into words.  As long as you continue to talk while playing, you shouldn’t have a hard time getting approved.

After you do complete the test, you can submit it and wait for feedback as to whether or not you were approved.

If you were approved, then you can access the dashboard to start making money playing games.  In the case you fail, they will provide you with feedback on how you can improve so that you can get approved in the future.  The qualification test is unpaid, but it is 100% necessary to complete to determine your eligibility.

The jobs you complete on the platform are just like the qualification test.  You will be asked to load a game, read the tasks, and then speak your thoughts out loud as you complete each task. 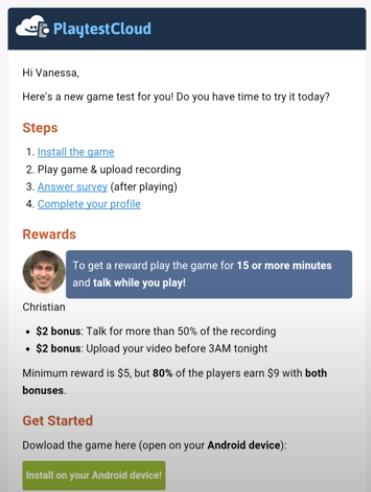 As you can see, it will show you the steps required of you as well as what you can make.  You will need to install the game, play it, record yourself as well as answer a survey and complete a profile.

And, in this case, you can earn a $2 bonus if you talk for more than 50% of the recording as well as upload your video before a certain time.  It’s important to tackle these bonuses as this is how you can earn up to $9 with both bonuses.  Failing to do so can lead to a lower $5~ payout.

During the testing, PlaytestCloud will record your screen as well as whatever you say during the active recording.  As long as you follow the directions as specified, usually talking the majority of the time while playing, you shouldn’t have a hard time getting approved.

According to the FAQ, the company sends out more than 100,000 invites a month, so there’s a good chance you can get a few invites a month.  But, like the survey world, it will greatly depend on your demographic in regards to how many tests you can complete in a month.  To increase your chances of more invites, they ask that you keep your profile updated, especially the games you’re playing right now.

How Much Does PlaytestCloud Pay?

I’ll be honest.  The pay on PlaytestCloud isn’t generous.  In fact, it isn’t enough to quit your job nor is it feasible to be considered a side hustle.  Instead, almost picture it as a way to earn enough for a lunch here and there.

Most of the jobs last about 15 minutes and will pay about $9 per test.  That’s about $36 per hour only if you were able to snag four 15-minute jobs that paid out $9 each.  This would be rare, however.

According to the FAQ, how much you earn will vary depending on the number of tasks you have to complete during the test as well as the length.  Some tests can be longer than 15 minutes, but this isn’t too common.

All payments are made via PayPal only almost immediately after your submission has been reviewed.  There are no minimums to cash out, so you shouldn’t have to wait any more than a few days after submitting your work.

If you love playing new games and you’re comfortable speaking into a microphone, then why not.  15 minutes for about $9 isn’t too bad for your time.  Plus, you’re having fun doing so.  Who knows?  You may find a game you want to keep on your phone.

Signing up is 100% free and you can get started in as little as a few days after you submit your qualification video.  Remember, as long as you keep your profile updated, you can see invites land in your inbox almost immediately.

As always, if you want to talk about PlaytestCloud, whether it’s good or bad, then feel free to do so in the comments below.