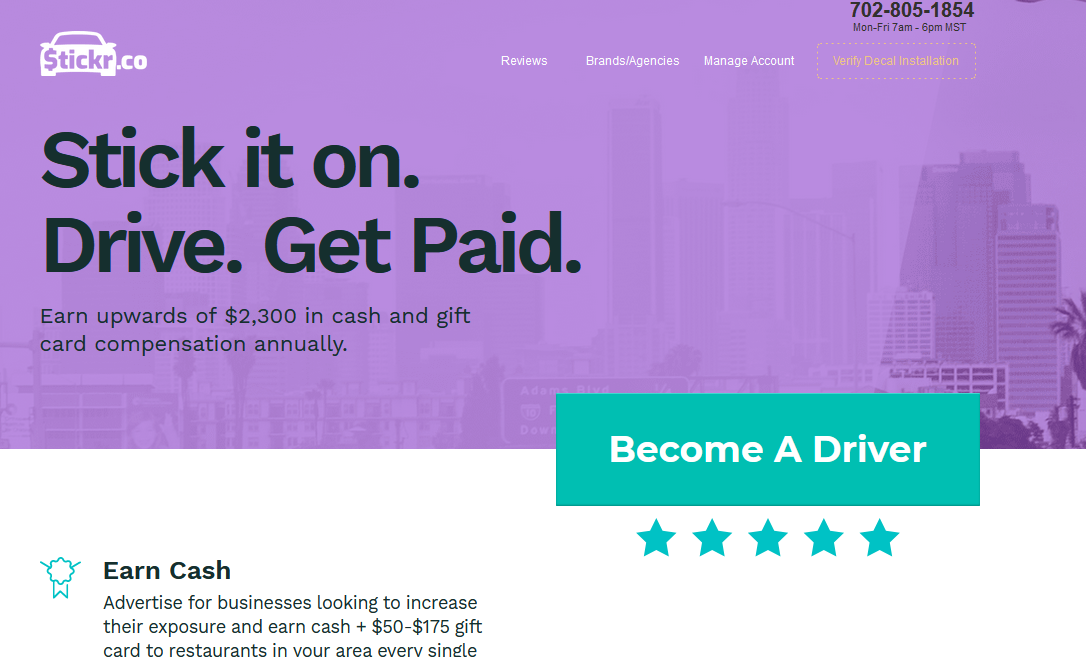 Stickr.co Review: Is it Legit? Eh…

Stickr.co states that you can “earn up to $2,300 in cash and gift card compensation annually” just by advertising on your car with a simple vinyl sticker.  It’s a claim that sounds too good to be true, and it may be the reason you’re on this review right now.  You may want to know if this company lives up to its word and if it’s worth your time.  Or, maybe you want to know of ways to make money advertising your car.

In today’s post, I wanted to talk about Stickr.co.  I will sign up and tell you how it works as well as if it’s legitimate.  As always, I’m 100% honest and don’t promote any garbage. I assure you that I tell you how it is and you won’t find any clickbait from me.

If you want to get paid advertising on your car and want to earn up to $2,300 a year, let’s see if it’s possible.

Stickr.co is a vehicle advertising company that connects drivers and businesses for car advertising.  Picture them as a middleman of sorts.  You will sign up as a driver and the advertiser will ask Stickr.co for people like you to advertise their message on a vinyl sticker that you slap on your car’s rear window.  As long as you fit the advertiser’s demographic, you will be asked if you want to run the campaign.  And, when you do, you get paid.

I couldn’t find much about the company’s history, only that they are located in Las Vegas, Nevada.  From the looks of it, they appear to be a legitimate organization, but there were a lot of poor reviews, but I will get into this later.  I feel the company isn’t out to scam you; rather, it could be seen as false advertising to some.

If you’re interested in signing up as a driver, you will first have to fill out an application.  This can be done by following the “become a driver” link on the main page.

In doing so, the company will ask you a few questions, such as:

The company will then take this data and determine if you’re a good fit for their database.  They also note that having an older vehicle does not exclude you from the campaigns.

It’s free to sign up and start looking at campaigns.

Most of the time, I have found that they accept just about anyone, as long as you’re insured and you own your vehicle.  I just want to mention this, as I don’t want you to feel that they only accept a select few.  This isn’t the case.

If you follow through with the company, the company will provide you with some details, basically letting you know how the program works.

As mentioned earlier, the company will provide you with a see-thru vinyl decal that will be placed on your rear window.  This only takes seconds to install and will include the advertiser’s message.

And, as long as you’re willing to participate in a campaign, you will get paid.  To get paid, all you need to do is take a picture that you installed the decal during a verification period.  Keep in mind that this window is small, so if you fail to upload your picture, you won’t get paid for the month.

So, after you sign up and they accept your account, you are then able to view the campaigns based on your zip code location.  This can happen within minutes.

For example, when I was writing this, I had four campaigns available to me, most of which were from companies I never heard of.  This is what your dashboard will look like:

Next to each campaign, you will see a bit about what the company is about, how you will be compensated as well as how many openings there are. 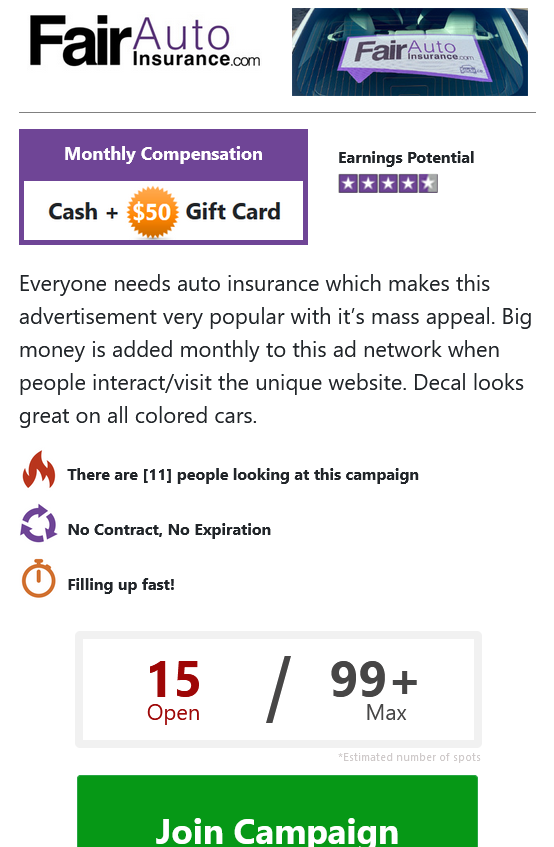 In that example, you will get paid cash plus a $50 gift card.  It’s vague, but when you sign up, it states “You’ll earn cash each month you participate in this campaign. You’ll also receive gift cards as part of your payment.”  It doesn’t say how much in total, however.  This is a mystery and not up front, raising a red flag.

When you finalize the campaign, they then give you a few rules, as to what to expect. 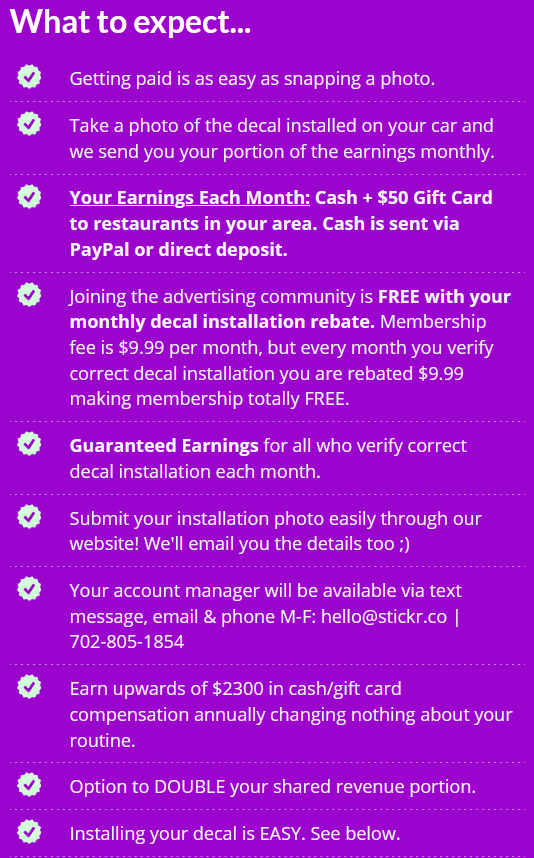 One of the biggest complaints is that you do have to pay a $9.99 monthly fee, however, if you prove that your decal is installed, you will get that fee refunded back into your account.  If you do pay that fee, they will ship off your decal, in which you can put in your car to start advertising. 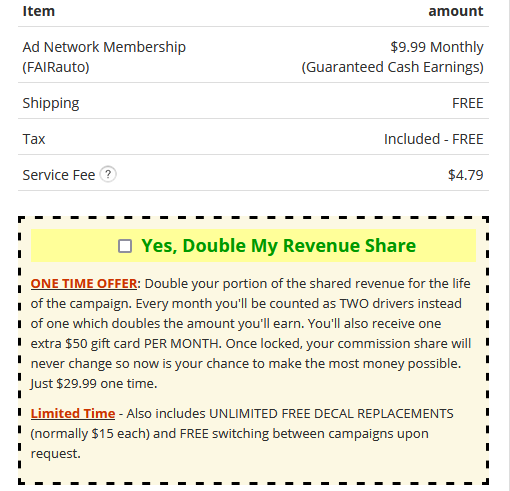 They also try to lure you into a “one time offer” and “limited time” deal, where you can “double your revenue share” for life if you pay a $29.99 one-time fee.  It’s a lot of fees, and most companies I often advertise do not charge you in any way.  All in all, you could be $100 in before you even receive your decal!

Everything so far sounds okay, but it still seems to good to be true.  In most of my reviews, I like to dig deep online and see what other people said, which brings me to my next point.

What the Internet is Saying

If you search for Stickr.co reviews, there’s a ton of information out there, so I wanted to create this post to compile what I found and let you know what to expect.  As you know, I’m honest and don’t want to see you get ripped off in any way. 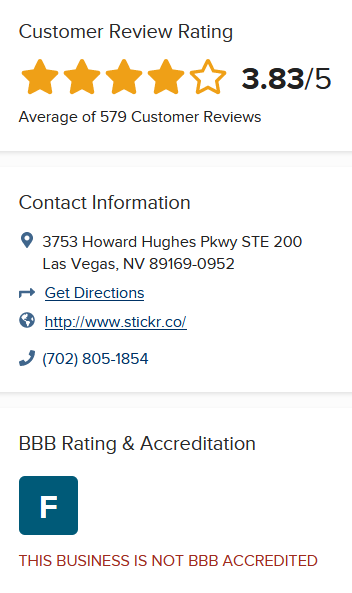 Many of the negative reviews talked about the deceptive practices, particularly the $9.99 monthly fee as well as the gift card, which turns out to be a lousy Restaurant.com gift card.  If you’re not familiar with it, this is a glorified coupon.  Like I found out, they don’t disclose how much you get paid and this was a HUGE complaint.

The other thing many users complained about were the lack of companies, saying they didn’t exist.  Some went on to say the companies being promoted, such as the ones I saw, were fabricated by Stickr.co, in hopes you bought into the fact they had many advertisers.

I did see some positive reviews on BBB, but they were indicative of fake 5-star reviews.  They were short, had simple names and didn’t seem natural.  Also, most of the sites that did have positive reviews, such as SiteJabber and TrustPilot, were positive, but these sites are known to alter reviews, only showing the best rated ones.   The thing that I noticed is that the positive reviews ONLY talk about the customer service, not how much you make.

For those who didn’t recommend, they also mentioned the poor gift card option being a Restaurant.com option, which seems to be useless to most.

Some also complained about the horrible customer service and unauthorized charges, even after canceling.

Reddit went as far as to say it was an MLM and don’t fall for it.  More than 50 people agreed.

And lastly, be sure to check out the many YouTube videos.  If you search for “Stickr.co,” you will find so many people complaining about the service.  I didn’t find one video that praised it.

So, How Much Can You make With Stickr.co?

I did a quite bit of research on this topic and found that most people break even after paying the fees.

For example, one member paid $120 to start and another $10 a month for a “service fee,” bringing her total to $20 per month.    Most people shared the same sediment, saying they lost money doing this.

If you’re able to make money, it’s peanuts after the company takes their share.  I’m talking maybe $3 to $10 a month, and sadly, this is if you opt into the double commission in the beginning.  And, this could be wiped out if you forget to verify your picture.

The annoying thing is that Stickr.co factors in the $50 gift card into its annual compensation claims, which isn’t even a gift card by any means.  So, if we took the $50 x 12, that’s a $600 value, right?  No!  But, Stickr apparently thinks so.

0/10Stickr.co is probably one of the most confusing companies I have ever researched.  They aren’t up front with much and most people don’t seem too happy with it.  I hate companies that charge you money to make money, because most of the time, you won’t make anything, as you can see.  If you were an honest company, you would implement the monthly fees into the payments some how so that you wouldn’t have to charge the driver.  I mean, how much does a vinyl sticker cost?  Also, be transparent!

In the end, I don’t recommend Stickr.com one bit.  Even if you feel you can make money, you will make peanuts.  I’m talking less than a few dollars.  You can use that energy and make $3 to $10 in as little as an hour doing surveys.  Plus, you don’t have to worry about a recurring charge, either.   You don’t want to give them your credit card and watch them take $10+ monthly if you don’t confirm your picture.  They make it seem like a good deal, but I promise you it’s not.  The “gift card” sucks and the payments are so low.

If you want to vent about Stickr.co or you want to change my mind, then by all means, you’re welcome to do so in the comments below.

Thanks for stopping by!