Surveys on the Go Review: Why It Has 2.5M Downloads

The Surveys on the Go app is a mobile market research tool that pays you for your opinion.  As I’m writing this, it has more than 2.5 million downloads with close to 81,000 reviews.  It’s one of the most popular money-making apps.

If you want to make money answering surveys from your phone and make up to $10 per survey, it may be one to download.  It’s one of the many to download, but is it worth taking up space on your phone?

In today’s review, I help answer that question as I download the Surveys on the Go app to see how it works, what you can make as well as if it’s worth your time.  As in all of my reviews, I’m always 100% honest, only recommending apps that I would personally use.  No matter what my relationship may be with a company, I can promise you that I will be non-bias and to the point.  There are no scams here nor do I promote garbage that so many other bloggers are pushing.  I’m not like that here.

With that rant out of the way, let’s jump in and see if the Surveys on the Go is worth your time.

What is the Surveys on the Go App?

The Surveys on the Go app lets you make cash by taking surveys.  Unlike many companies that pay you in points, it’s not like that here as the company pays you in cash, not points.  According to the official app description, surveys can pay $1 to $5, with some paying as much as $10.  To get these higher-paying surveys, however, they do note that you should have your notifications and location services on at all times.

Right now, the app is operated by MFour Mobile Research, which is a market research firm based in Irving, California.  According to its LinkedIn page, they are said to be “disrupting the $45 billion-dollar market research company,” helping combine online and in-store data with real-time consumer opinions.

Signing up for the Surveys on the Go App

To download the Surveys on the Go app, you can do so via the Google Play Store or iTunes.  Whichever method you choose will have no effect in how the app works.  It’s 100% free to download.  At the moment, there isn’t a desktop website version. 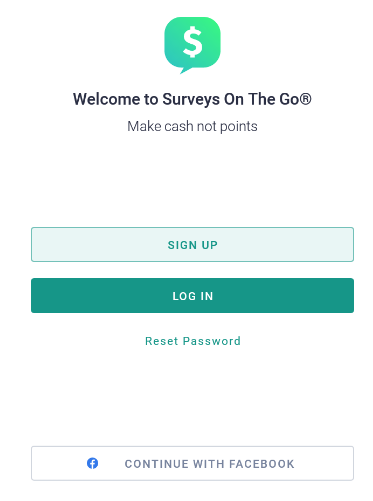 The entire sign-up process is a breeze and maybe takes you one minute at most to complete.

To qualify, you must be at least 16+ years old and reside in the United States.

Once you create an account, the app will walk you through a tutorial of sorts, letting you know how the app works as well as what’s expected of you. 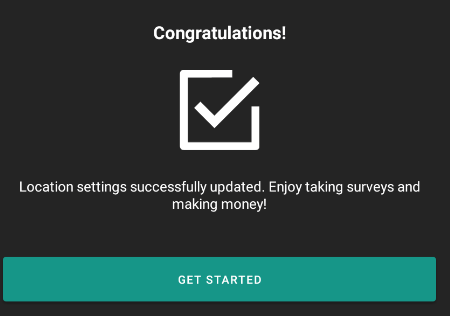 To get started, they will run you through a profiler, in which you will be asked more about your household. 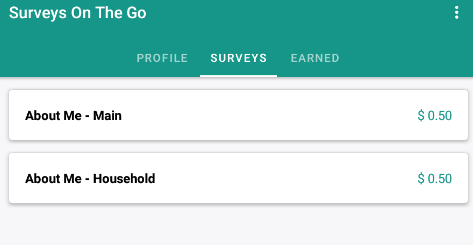 Now, this is standard with almost all survey sites, but the cool thing about Surveys on the Go is that they will pay you to complete your profile survey, $0.50 each.  It’s not much, about $1 in total, but most companies do not pay you and force you to spend 10 to 20 minutes of your time to fill out a profile, only to capture your information and hopefully send you more surveys in the future.

If you want to continue and take surveys with this app, you will have to fill out your profile so that the company can learn more about you.  After all, you wouldn’t want a baby diaper company to send you a survey when you don’t even have a baby.  This profile will help you avoid disqualifications and make you more money.

When I completed the two profile surveys, it took me about five minutes to finish.  After doing so, the company will ask you to tweak your accessibility for more surveys, but this is 100% optional. If you do agree to the accessibility terms, then the app can observe your actions and inspect the content of a window you’re working with.  In order words, it’s going to track your phone activity.

If you want to participate in the TrackCash weekly, you will need to activate this, but again, it’s not mandatory.

After you complete the two profile surveys, you can start taking surveys and they will show up on your mobile phone dashboard. 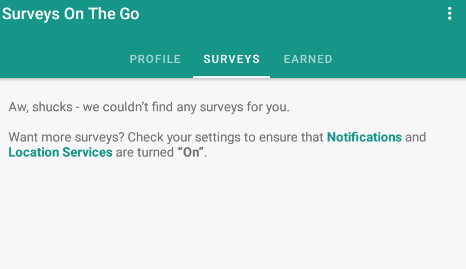 At first, you may not see surveys, but as time goes on, surveys will be added to your dashboard.

How many surveys can you expect?

This question is always asked with any survey provider, and it’s hard to give a definite answer as it greatly depends on your demographic.  Seeing that Surveys on the Go doesn’t work with your typical third-party providers, you won’t see as many survey options.  While this isn’t a bad thing, you shouldn’t expect many surveys as they all come from in house, simply meaning every survey you see is unique to them.

On average, plan on seeing a handful of surveys a month, maybe two to three a week at most.  It won’t be much, but hey, these survey sites aren’t designed to make you rich.

Surveys on the Go Rewards

To cash out, you need at least $10 in rewards to do so.  At the moment, the company offers, four payout options, including Amazon, Visa, Starbucks and PayPal. 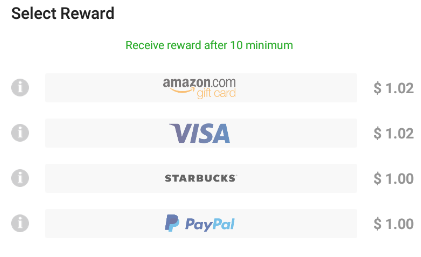 Upon redeeming, it is done so within three to five days. 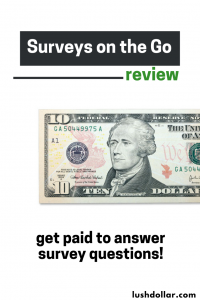 7/10You won’t get rich with the Surveys on the Go app, but I do like that they offer their own surveys, which means you won’t find the typical third-party offerwalls so many other survey sites have.  Because of this, however, you won’t find many surveys per week, maybe a few at best.  This means you will be lucky to make $10 every few months.  But, hey, you won’t get rich doing surveys, so it shouldn’t come at a surprise to you.

For now, I would at least download the app and take the surveys when prompted.  Personally, I wouldn’t let the app track me, but that’s me.  If you decide to do so, which is your own choice, then you may increase your chances at more surveys.  I don’t feel like giving up that much information to a research company, however.