The Screenwise Meter Panel is a panel of sorts in collaboration with Google and Ipsos, one of the biggest names in the research industry.  This app is used to manage registered panelists’ participation in market research panels.

As of right now, you can only join the panel if you have a special code.  If you don’t have one, you can’t join.  And, unfortunately, you can’t request one, either.  It appears to be random.

However, in the case you do receive one, I wanted to talk a pinch about what the panel is about and if it’s worth your time.

As in all of my reviews, I’m always 100% honest and would never ever push something that I wouldn’t use.  Since there are so many scams out there, I feel as if I must weed out the garbage from the good.  I know many “writers” can say this, but you can check out my history on this site and see that I don’t push any “get rich quick” scams nor do I push programs that other bloggers do, such as the Wealthy Affiliate.  I won’t even get started on those people.

Anyways, with that out of the way, let’s dive in and see what the Screenwise Panel is about and if it’s worth your time.

What is the Screenwise Meter Panel?

Initially, when the app/company first formed, it was owned solely by Google, but since then, it appears they have collaborated with one of the largest research companies, Ipsos.  Hearing these two names put me at ease as they are very reputable and do offer decent products.  I mean, do I really need to explain Google?  As for Ipsos, they are a very reputable research panel, but not all of their products are worth signing up for.

According to the official landing page, the Screenwise Media Panel partners with many market research companies to help them learn how you use your mobile phone.  They want to see how you use media, how you interact with Google, and so forth.

In a way, it’s like allowing someone to spy on your cellphone usage, but it won’t be as invasive as you think.  It’s not like someone can tap into your phone and see what you’re doing via your camera.

While you do have to give up some rights to your phone, you have to ask yourself if it’s worth the money they are paying you.  I will get into how much they pay you later on in this guide.

In short, if you do volunteer,  you must be willing to allow Google to track you while using your phone.

As mentioned prior, not anyone can sign up as you will need a code to sign up.

I know this can be annoying, but I have seen people receive this code and not have a lot of information available to them.

If you were to enroll, you can do so here.

To join, you must reside in the United States and be older than 13.  You must also have a qualifying smartphone/PC and be willing to install the software, such as an app and/or Chrome extension.

So, How Can I Get an Invite Code?

It’s hard to say because it seems to be random.

However, in the past, they allowed anyone to sign up.  According to an older Search Engine Journal article, you had to be at least 13 years old and be willing to install a browser extension to share with Google.   This doesn’t appear to be the case anymore.

So, your guess is as good as mine.

From what I hear, however, you will often get an invite if you take a random survey on sites such as Swagbucks.  If you meet the demographic, then they will send you an invite, which you can accept or deny.  Just keep taking surveys and wait for that invite.  Again, it’s random, so you may never see it.  But, if you take a lot of surveys like I do, then you may increase your chances at getting the chance to join.

How Does It Work?

So, let’s say you’re lucky enough to become a participant.  There are a few ways you can join, all of which I will cover below.

If you do get an invite, you may be asked to install a simple piece of hardware.  It will look something like a high-end router, according to Google.  I linked the picture below.

They will mail it to your home, along with “easy” instructions and will ask you to set it up.  If you do have trouble, they have a support staff that can walk you through the process.

Once your router is connected, that’s it.  You don’t have to answer surveys nor do you really have to do any work.  As mentioned, you’re just letting Google spy on you in a way.  According to them, they will use this information and share the data it collects with various companies/institutions.

However, your data won’t be linked to you personally.  Rather, it will be anonymized.  Google will do everything that it can to remove personally identifiable information before sharing.

If you’re using the app instead, then it appears you will not need the device mentioned prior.  Instead, you will be asked to download this app and simply run it to get your reward.

In this case, Google may send you surveys to complete or even ask you to check in to start earning points. 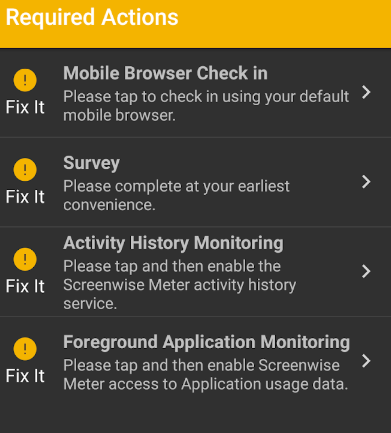 Honestly, I’m not even sure if Google is still sending out the router devices anymore, but I just wanted to include in the case they want to monitor your usage at home rather than on your mobile device.  In talking to reviewers, it appears most people are being asked to download the app.

In the end, you’re going to allow Google to monitor your activity, from what apps you’re downloading to which videos you’re watching on YouTube.  Just picture it as almost someone looking over your shoulder as you’re using your device.  If you’re comfortable with this, then it could make sense to download it.  Your results will vary, however.  If you want to read in depth what it could do, this EFF.org article sums it up nicely.

Lastly, aside from the mobile app, you can also install the Chrome extension, which works like the mobile app.  You will just need to make sure it’s activated any time you’re using your computer and that’s it.  In some cases, you may be able to combine both.

To install this extension, you will be able to find the “installation setup” on your profile once activated.  You can find it here…

This link will take you to the “Screenwise Trends Panel” extension, which will install just like any other Chrome extension.

Once activated, you can then access a “metering” screen.

This simply means that while the app is “metering,” it’s collecting your data. However, when you turn it off, which you can do so at any time, it means it’s no longer tracking.  Just keep in mind that when you do pause, you won’t get rewarded for that time.  You can also see if the Chrome extension in the upper-right hand corner, letting you know when the app is metering as well.

How Much Do You Make?

Back when Google used to send out the devices to your home, it appeared they would pay around $100 to sign-up and then $20 per month for up to a year.  Again, I don’t think they are sending out the devices anymore, but in the case they are, your payments may seem similar to this.

As for the app, which seems to be the more popular option today, it appears you can make about $1 per week per device as long as you stay active with the app.  This reward tier was taken directly from the app itself:

To earn your cash, just make sure you pay attention to the browse check-in as you will have to click this to start earning points.  I did read reports that you can add up to six devices, so in this case, it could be possible to earn up to $6 a week or $24 a month doing what you’re already doing.  As you can see, you can earn $2+ a week combining a computer, smartphone and tablet.

As for rewards, you can choose from a variety of gift cards, including Visa gift cards if you choose this route.

As with all of my reviews, I love to see what the internet is saying and bundle it up in snippets here.  Everything I review has its pros and cons, so don’t be too concerned if you see too many cons, especially if I give it high remarks.

Below, I break down the pros and cons I found online:

You have to ask yourself if $1 a week if worth giving up your internet history to research companies.  Some feel fine with it, while others don’t like the idea.  Personally, I don’t find it worth $1 a week, but if you do, then more power to you.  It’s an easy way to make money as long as you don’t mind being spied on in a way.

If you do end up getting a code and joining, then be sure to check out MobileXpressions as they work in the same way.  The only difference is that you don’t have to wait for a code.

Backed by very powerful companies, you can at least know you’re going to get rewarded if you do join, so that’s a perk.  Yes, it’s 100% legitimate and it’s in no way a scam.

Have you joined the panel?

If so, be sure to do so in the comments below!