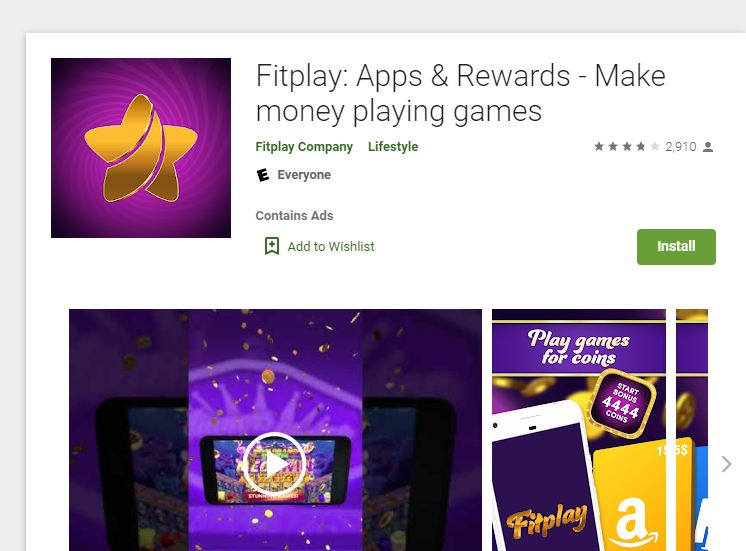 If you like to play games and you want to get paid for it, then you may want to check out the Fitplay app.  This app claims that you can earn real cash rewards and coupons just for having fun.

While you won’t get rich downloading this app, you can make a few dollars in your spare time having some fun.  So, as long as you don’t mind not getting rich, it may be something to check out.

In today’s review, let’s check out Fitplay.  Let’s see how much you can make, how it works and if it’s worth your time.  As in all of my reviews, I remain 100% honest and will never mislead you in any way.

Fitplay is an app that rewards you to download new games.  You get to choose the games you want to download and you can then earn money whenever you play.  Generally, the more you play, the more coins you can earn, in which you can then exchange for a variety of rewards, such as PayPal cash and gift cards.

It’s owned by the Fitplay Company, which has been an Android developer since 2016.

Yes, I have found multiple cash out screenshots online, as well as high remarks on Reddit, so there’s no doubt you will be paid.  The developer has been in business for quite some time and the app is one of the biggest in the space.

To sign up for Fitplay, you can do it by connecting your Facebook account, Google account, or you can register with a new email.  It’s up to you, but it will lead you to the right dashboard.

Signing up takes maybe five minutes at most, and it will ask for a few basics such as your gender and age.

It’s 100% free to join and is available only for Android devices at the moment. 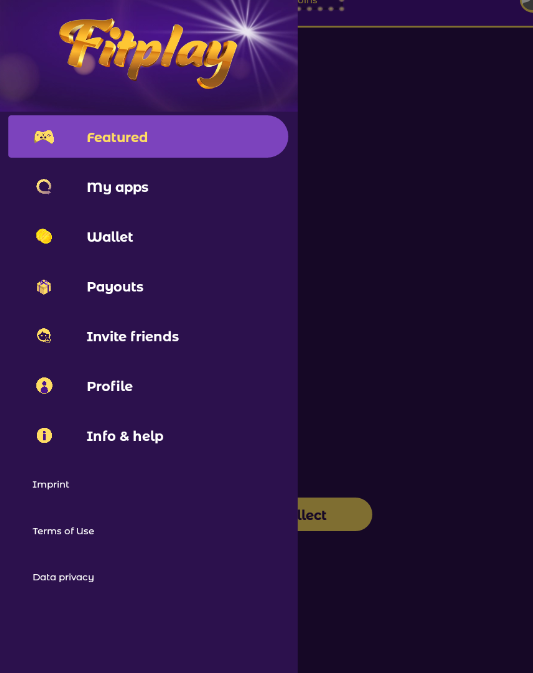 It’s not much, but you can view the “featured” games, which is a list of games you can download to start earning coins.

The “my apps” section will showcase the apps you already downloaded.  In some cases, you may have to reach a certain level before you’re rewarded, so it’s nice to keep tabs.

Your “wallet” will keep track of the coins you have earned, in which you can eventually cash out for a variety of prizes.  I will get into that later.  For now, let’s talk about the games…

When you click on the “featured” tab or the “play and collect” button, which is on your home screen, you will be presented with a list that looks something like this: 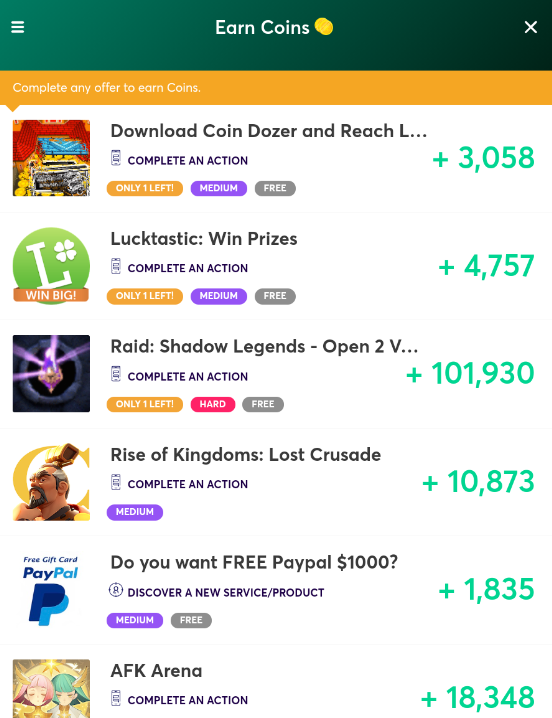 And, as you can see, you can see a variety of games, which will have a coin total next to each.   The app will then note whether it’s “easy, medium or hard,” which means how much effort it will take on your part to earn the coins.  Keep in mind that some apps will be much more than just “downloading” it and then earning what you see.  In many cases, you may have to perform an action.

Let me give you an example…

If we were to click on the “Rise of Kingdoms” game as seen above, we’re presented with this: 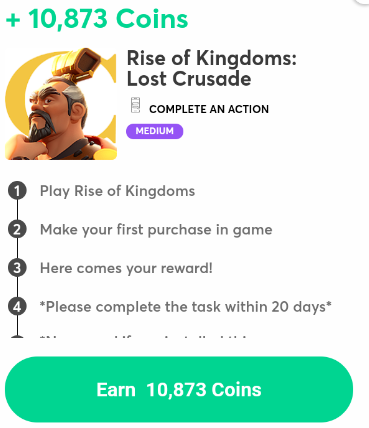 On the list, it says I need to play and make a purchase within 20 days.  If we scroll down, it also notes that there’s no reward if we installed the game before.  So, essentially, if you download the game as a first-time player and make a purchase, you get 10,873 coins. 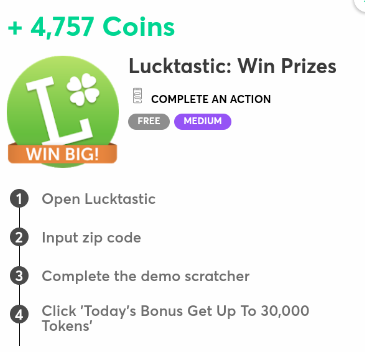 This one states I need to download the app, enter my zip code and then complete the demo scratcher.  I will also have to click on the “get up to 30,000 tokens” link within the app and then download an app.  This one doesn’t require a payment, per se, but it still requires some work.

Most of the apps that you see on the list will require effort, so it’s very important that you read the step-by-step instructions to ensure you get paid.

So, you’re probably wondering what your Fitplay coins are worth?

Unfortunately, the website doesn’t use a simple system, where every point is worth a penny. Rather, it’s quite complicated, which I find to be annoying.

At the moment, the company offers the following reward options:

Once you cash out, it can take up to seven business days to receive your payment.

6/10Fitplay is one of the many apps that pay you to download apps.  I wouldn’t say it’s the best one nor would I say it’s the best.  Be sure to check out the many competitors in this post to see which one makes the most sense to you.

For now, Fitplay is legit, and it does pay, but I feel there are much better options to make money online.  And, I would recommend it if you’re looking to test out new games/apps or maybe there’s an option on there that makes sense.

That’s it for now.

As always, if you want to comment and/or ask a question, feel free to use the comments section below.