The Opinion Bureau is one of the so many survey companies on the market.  Like the many I have mentioned before, it’s yet another that rewards you to answer survey questions.  The concept is simple, however, you won’t get rich, unfortunately.

Now, the Opinion Bureau isn’t as popular as most of the options I list; however, it doesn’t mean it’s one to ignore.

In today’s review, I want to talk about Opinion Bureau.  Let’s see how much you can make, how it works as well as if I recommend it.  As always, I’m 100% honest and won’t refer you to any products that make me thousands of dollars.  I don’t work that way.

So, with that out of the way, let’s jump and see what Opinion Bureau is all about.

What is the Opinion Bureau?

The company will reward you with gift cards for taking surveys.  It’s as easy as logging into your dashboard, answering some simple questions and then getting credited for your time.  According to the company, it’s a “community for people who like to share their perspective on brands and related services.”

The website is operated by Internet Research Bureau Pvt. Ltd. I couldn’t find much about the company’s history when I was digging around, but what I did see is that there were a lot of grammatical/spelling mistakes, taking away from the website’s professionalism.  While the website itself looked professional, many of the answers in the FAQ seemed like it was written by a non-native speaker.  This was a red flag to me at first, but I still signed up, as well as researched it, just to make sure my gut wasn’t right/wrong.

To sign up for the platform, the company will ask for a few pieces of personal information, such as your email address, name, gender and zip code.  You can also connect your Google or Facebook account, if you prefer.

The entire process takes about two minutes, and you can access your dashboard immediately after confirming your e-mail address.

Signing up is 100% free and you should get a $5 reward just for signing up.  Just confirm this when signing up.

NOTE:  It’s unclear who the company accepts since I don’t see any country restrictions.  For now, I will say it’s open to all, but again, it’s not noted.  Proceed at your own risk. 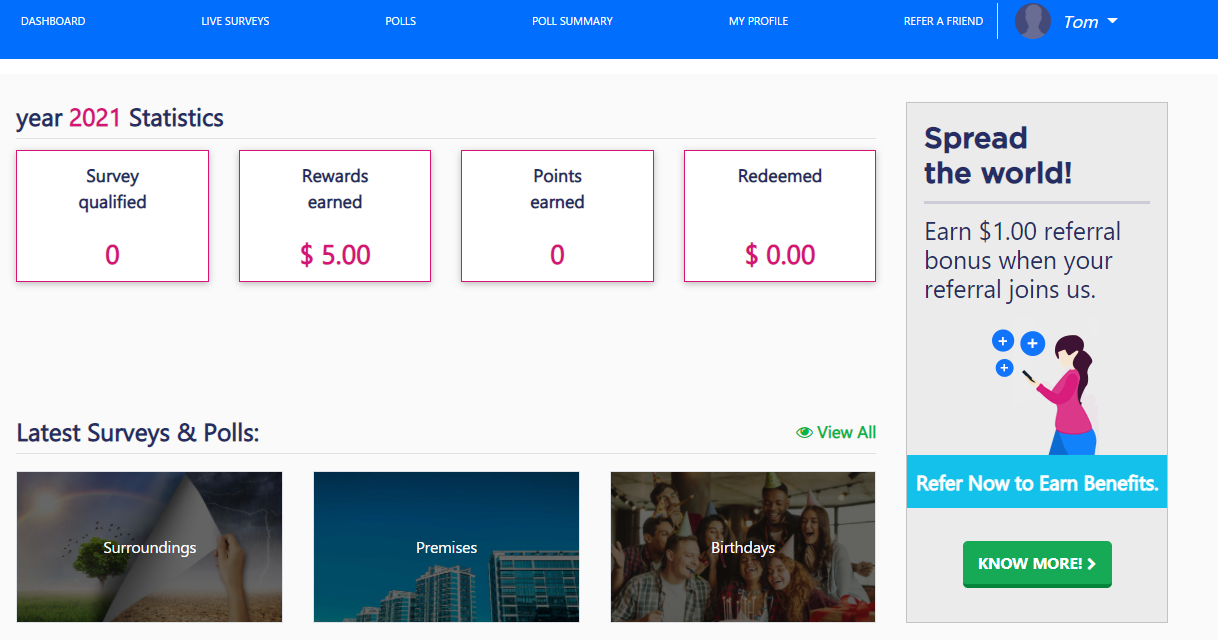 As you can see, the dashboard is simple to understand.

The top menu, as well as the main screen, will include all of the surveys to start making cash.  However, before you take a survey, make sure that you fill out your profile in its entirety to get as many surveys as possible.  This is commonplace among most surveys companies and Opinion Bureau is no different.

The great thing about filling out your profile is that the company will pay you $1 upon completion.

The only way you can make money with the site is via surveys, that’s it.  This can be seen as a perk to some, as a lot of survey sites out there often have other ways to earn money, such as watching videos or completing offers.  While there’s nothing wrong with that, a lot of the time, these offers/TV deals can be misleading or low in pay.  This isn’t always the case, though.

The company does have a poll section, but it seems like something you do for fun.  You can answer the questions, but you won’t be compensated for your time.

To start taking surveys, just take a glance at the main website once you log in or click on the live surveys tab near the top.

If any surveys are available, you should see a list noted as to what the topic is as well as what you can make.

Like most surveys sites, just remember that you will not qualify for every survey invite you see.  So, just because there’s a survey link, it doesn’t guarantee you that cash.  Most of the time, you will qualify for maybe 20% of the surveys you take.

From what I understand, the company sends out very few surveys a month.  I’m talking about a survey maybe once every week or two.  It’s not many, and this is one of the main reasons people say to avoid this site.  You won’t get a lot of survey invites.

How much will the surveys pay out?

The company pays about $1 on average, sometimes a pinch more, sometimes less.  This seemed to be the sweet spot.  Some surveys will pay in points, in which you can convert to cash.  You won’t find many high-paying surveys on this platform, unfortunately.

To get credit for your survey, the company notes it will take 45 days to be redeemable.  This is very high in comparison to most survey sites.

As mentioned, some surveys will pay you in points, but in the end, you can convert these points into cash.

When it comes time to cash out, you can choose the cash option or from a variety of gift cards, but you will need at least $10 to do so.

I couldn’t find much about the site, but I did find a smaller thread on SurveyPolice.com where people talked about not getting surveys and taking forever to reach the minimum threshold.  One person noted it took close to two months to reach $10, while a few others talked about not getting an answer from customer support.  Remember that it’s going to take you close to 45 days just to see a survey credit.  This is so long.

I also found the more than 300+ Google Play Store reviews where users gave it a very poor 1.9/5.  I would say this is one of the worst reviews I have seen for a survey app.  Almost all of the reviews talked about the technical glitches and how they didn’t receive a survey.

Most people had nothing but bad things to say about it.

2/10In the end, I would skip out on Opinion Bureau.  They don’t send out surveys, the customer service is non-existent and it takes 45 days to get a survey credit.  That’s unheard of!  Plus, everything I did read online was negative.  I couldn’t find much that was positive, to be honest.

If you want to take surveys, there are so many other options to consider such as the many I mention here and here.  You will never get rich with surveys but you can make a few dollars here and there.  As long as you have that mindset, it makes them that much better.

As always, check out the hundreds of guides I have written as well as my YouTube channel.  I continue to add honest money-making/saving guides as often as I can.  Thanks for visiting!

The Make Money Online SMS app is a free app only available for Android devices that pays you to receive text messages generated by their customers.  Simply put, you get paid to receive texts, that’s it. ...

With Volutic, they claim that you can earn money reading emails.  And, in theory, it sounds awesome, but let me forewarn you that all of these sites don’t pay out much.  I’m talking pennies per day.  The...

Can You Earn Money with You Cubez? (review)

You Cubez was founded in 2007 and it’s one of the many ways that you can make money online, particularly by watching videos, taking surveys or even completing tasks. They have close to 1,000,000 members and have...