Roadie Driver Review: Is This Driving Gig Worth It?

Roadie, a UPS company, is a same-day delivery platform that connects people with stuff to send drivers already heading in their direction.  Simply put, someone needs something shipped and the company reaches out to its freelancers to see who’s willing to take the package from point A to point B.  For example, an airline may need you to deliver luggage to a customer or a homeowner may need help picking up an order at a local retailer.

You get to choose the jobs you want to do and you can work whenever you please, seeing you’re considered an independent contractor.  It’s the ultimate flexible gig.

If you love Amazon Flex or maybe you’re looking for a driving job that doesn’t involve dealing with people, then Roadie may be a consideration.  It’s not the biggest opportunity available, but depending on where you live, you could make a few hundred, maybe more, per month.  Like anything, it depends on how hard you work, where you live and when you work.

In today’s review, I will talk about Roadie, explaining the pay structure, how it works as well as if it’s worth your time.  As in all of my reviews, I’m always 100% honest and non-biased, only recommending what I feel is worth your time.

Qualifications to Drive for Roadie

If you’re interested in driving with Roadie, you must meet the following qualifications to be considered:

The nice thing about Roadie is that they don’t have vehicle restrictions like that of Uber.  You can drive whatever you want, as long as it’s street legal and you’re insured, of course.

If you meet the qualifications and you’re interested in signing up, then you can follow this link to start the application process.

They will ask you for your basic personal information as well as ask you to verify your mobile phone number.  It’s not much of a process and only takes a few minutes to complete.

After signing up, you may find yourself on a waitlist, but this will depend on your area.  If this is the case, they will reach out to you once a spot opens up.  This can take anywhere from a few days to more than a few months.  This will greatly depend on the market.

If there’s no waitlist, then you should expect to hear back from the company within the week as long as you meet the qualifications noted above.

If you have worked for Amazon Flex, it works in a similar way, where you’re able to view the available gigs on a list.  It’s a first-come, first serve opportunity, so you may have to act fast to snag a job. 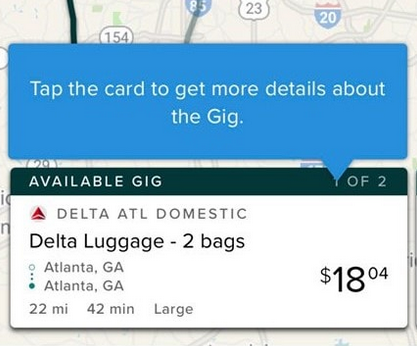 Every job will tell you where your pickup is, where you’re dropping off as well as the distance traveled.  Above, you can see a screenshot of a job opportunity to give you an idea as to what to expect.  For example, that particular job would pay you $18 to pick up two luggage bags and then travel 22 miles.  In this case, there’s a reason it’s up, simply due to it being less than $1 per mile.  A smart driver will usually want at least $1 a mile to make it worth their time.

All jobs will have the full payout noted, however, there are times where you may see “tips possible,” which means the customer may add a tip after the delivery completes.  This isn’t guaranteed, though.

I want to mention that your gigs may be different than mine since it’s based on various factors, including:

The Gig Matching system can be complex to understand, but it really isn’t.  As long as you maintain good ratings and you’re near a hot spot, then you shouldn’t have a problem getting gigs if you’re in a popular area.

Once you’re matched with a gig, you are expected to deliver the items in a timely manner, as stated within the app.

How Much Does Roadie Pay?

How much you make with Roadie will depend on a few factors, such as how far the job takes you, what you’re delivering as well as the demand at the time.

The company states you can make anywhere from $8 to $50 for local gigs, usually no more than 30 miles, and up to $650 for longer distance gigs, which can be up to hundreds, sometimes more than one thousand miles away.  The long-distance gigs are designed more for someone going in that direction rather than going to the location and then back again.

On average, expect to make $10 to $20 per trip or about $15 to $25 per hour gross.  Remember, as a contractor, you are responsible for your vehicle maintenance, gas as well as taxes at the end of the year.

The cool thing about Roadie is that they do offer an instant pay service if you want your cash right away after completing a job.  However, in order to qualify, your first gig must have been at least seven days ago and you must have completed at least five gigs.  As long as you meet these simple requirements, you can use the instant cash out feature, which sends your cash directly to your bank account, as long as it’s approved to accept payments instantly.

If you don’t take advantage of the instant payout feature, then the company will process your payments every Tuesday, which means you can expect your earnings one to three days after, depending on your bank.

The more than 110+ Indeed reviewers gave the company a poor 3/5 rating.  What people didn’t like was the lacking customer support, low compensation and app problems.  However, many did like the flexibility and pay in some areas.  It seemed like your results would vary, but a lot of people did complain it was very hard to get help from the company when on a job.

The official Google Play app has a 4.1/5 rating with more than 8,000 reviews.  The recommended reviews talked about the lower pay, the weird glitches as well as the lack of customer support.  As of late, people talked about how much the company has changed, such as not allowing multiple pickups and dropping the pay.  Many reviews were negative, but I did read some positives such as those who liked using it while taking a road trip and a few stating it paid a decent amount if you knew how to use the app.

50+ Glassdoor users gave the company a 3.5/5 rating with only 59% approving the CEO so far.  Focusing on the positive, many liked the flexible schedule, the self employment aspect and plenty of gigs in some areas.  Negatives included not knowing what you may pick up and the stress of keeping your ratings up to stay active on the platform.

7/10Roadie seems to have mixed reviews online, but I think you should at least test it out.  I did read quite a few reviews where I found people making $200+ as long as you learned the ropes and completed the jobs as noted to maintain a good rating.  While no app will perfect, Roadie seems to be trying and it has shown over the years.  As long as you’re picking up jobs that make sense financially, I don’t see how you can’t fail.

In the end, Roadie is much different than your Uber and food delivery apps of the world.  It’s a great way to get away from people and food and deliver random items to people around your town.  Again, your results will vary, but seeing it’s extremely easy to sign up, at least consider it.  Worst case, you can always delete your account if you’re unhappy with the service.

As always, if you want to comment on your Roadie experience, you’re more than welcome to do so in the comments below.