Today, I’m going to review the Coin Dozer the game app.  It’s a bit different than most money-making apps I review as this one is geared more toward winning prizes.  It kind of reminds me of the Lucky Day and Lucky Dollar app.  Before you get annoyed, however, let it be known that these prizes do have value and the game can be much more enjoyable than the blah survey apps.

If you’re a fan of playing games and want to do so with what seems like a highly-rated app, let’s take a gander at what it’s all about.

What is the Coin Dozer App?

If you search for “coin dozer” on the Google Play store, it leads you to three different options:  sweepstakes, casino, and haunted ghosts.  The most popular option, and the one we’re reviewing today, is the “sweepstakes” app.  It’s a coin pushing app, similar to that you find at a carnival or local Chuck E. Cheese.  It looks something like this to give you an idea… 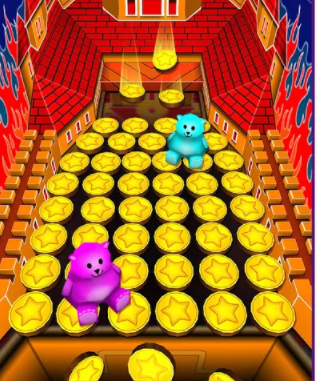 The more coins you can push off the ledge, the more you can win.  Don’t worry, I will talk about how the app works in detail later on here.

For now, let it be known that it’s operated by a very reputable company, Game Circus, and the app has millions of users.  In fact, when I was reviewing this, they had more than 50 million downloads with a fantastic 4.6/5 rating.  It’s an app that has been around for years now.

To sign up for the app, the company will connect your Google Play games account if you have one. 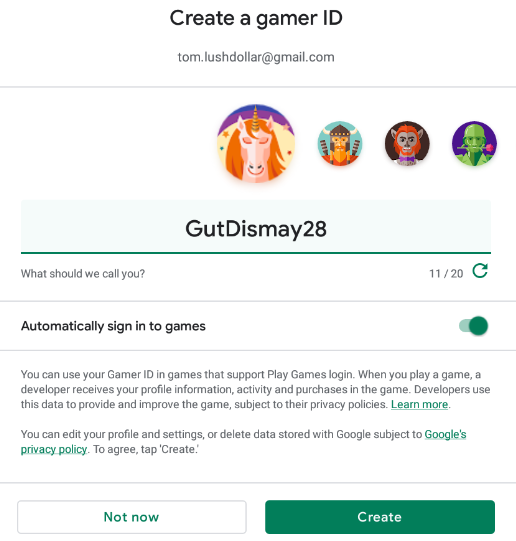 You are asked to create a gamer ID, which is connected to your email and it will then load the app right up.  It only took me about 30 seconds to start playing.

Let it be known if you want to be eligible for the sweepstakes, you will need to be a U.S. resident, over 16 and reach a level three.

Immediately after signing up, the app will give you a number of coins to show you the ropes.  I started with 40 coins, and this is what my dashboard looked like… 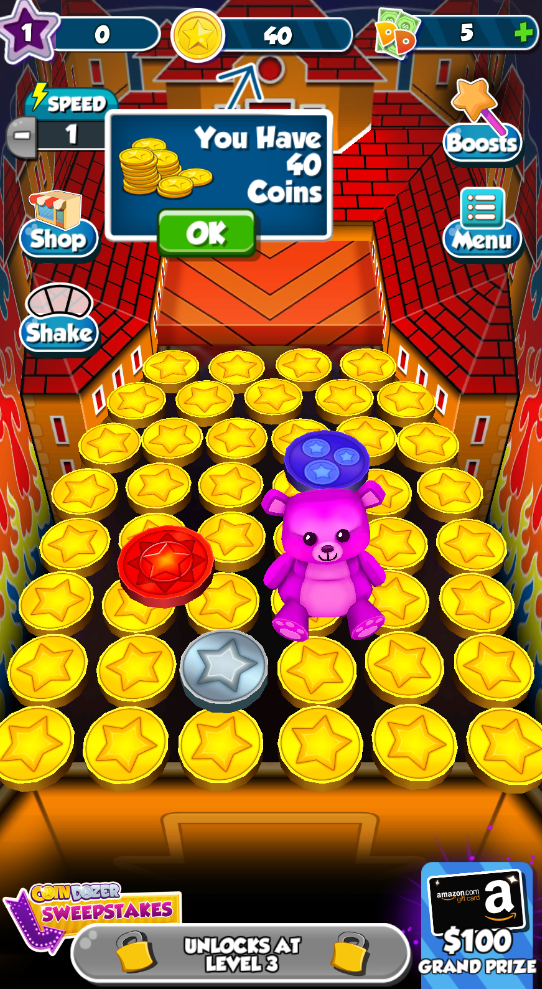 And, as I pushed coins into the tray where I wanted the coins to drop, it would add coins to may balance in my menu, as seen here… 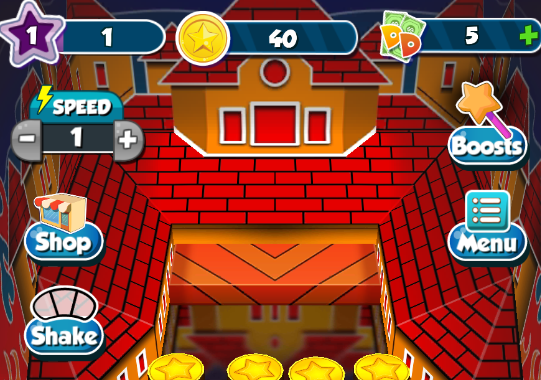 As I was pushing the coins, the app would interrupt with 30-second ads every so often.  After all, they need to pay out their prizes somehow, right?

And, as for the gameplay, it works no differently than the one found inside of an arcade.  Just drop your coin and let the physics figure out where your coins are going to be pushed.

Throughout the drops, I could also “shake” the screen, which would do just what you thought it would do.  Basically, it would shake any loose coins that were about to fall into the tray, however, you would have to wait for the bar to fill in its entirety before you could press it.  The more you played, the more your bar would fill up.  You could also increase your speeds if you felt the coins weren’t dropping as fast as you wanted them to.

The coins kept adding to my balance, so it felt as if I could play on for a long time.  However, if you do run out of coins, the app will refill your balance, one coin at a time, every 30 seconds.

As you continue to add coins to your balance, you will earn points, in which you will rise in the ranks with the level.

In doing this, every level will help you unlock prizes.

For example, when I upgraded to level two, I earned a free giant coin, which I could add to the screen at any time.

According to this StackExchange thread, the max tier is level nine,  and in order to get there, you will need to spend 10 Dozer Dollars, which are either bought or earned inside the game by solving puzzles.  It appears you can get up to level 300 if you’re looking for a number.

Aside from the coins, you will notice some items that don’t look like a coin, as seen here: 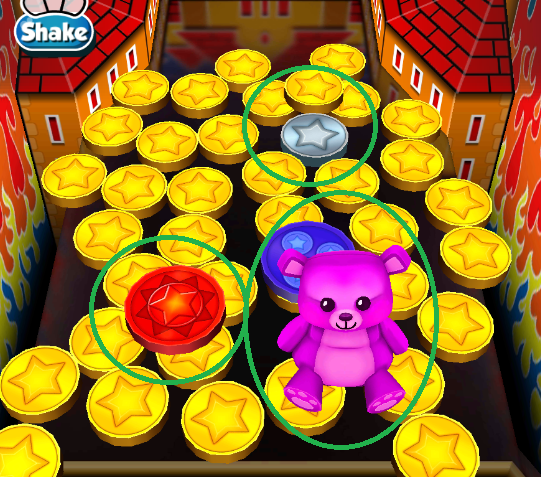 These are referred to as “special coins” and “mystery boxes,” and how they work will depend on which item you get.  For example, a silver coin will reimburse bonus coins, whereas XP coins will give you more XP to help level you up.  Another one, like the balloon pop token, lets you play a mini-game, where you can pop balloons to collect points and eventually open a special chest.

As for the mystery boxes, they are just that — a mystery.  If you’re able to win one of these, you will win a random reward, such as a regular coin, special coin, etc.

This is where the app gets you, as like the many apps like this one the market, the company tries to get you to buy “Dozer Dollars.” 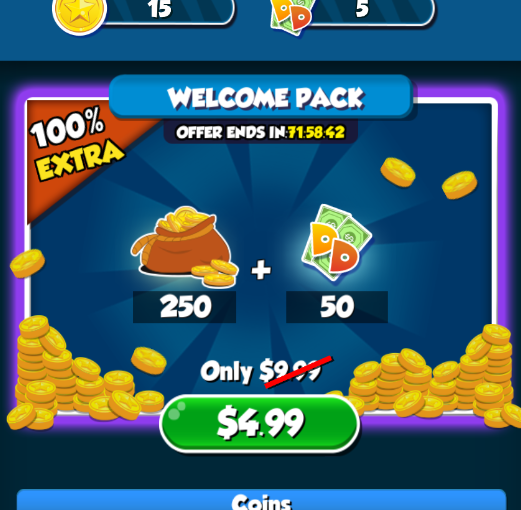 In short, these dollars will get you more coins to play with once you run out.  While the company will give you coins every 30 seconds, you will only get one at a time.  This can be frustrating if you want to play.

I don’t recommend buying these coins since the investment isn’t worth it, seeing you’re looking to play for a sweepstakes item, essentially.

Also on the app are what’s known as Coin Walls, and this is fairly common among apps like this. 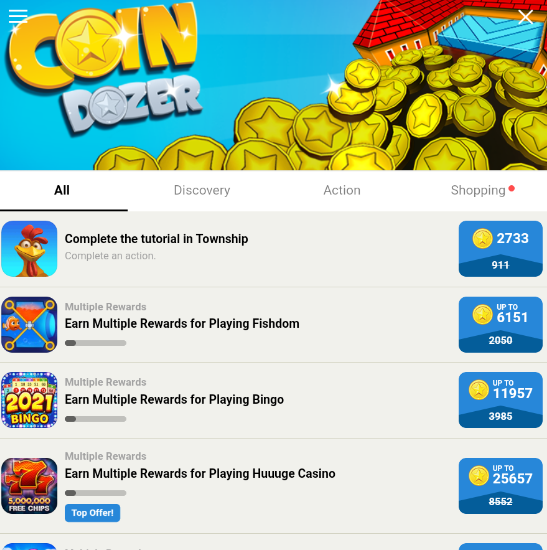 What they do is partner with a third-party offerwall provider, in this case, TapJoy, and will give you coins for signing up for offers, as seen above.

I highly recommend you DO NOT do these offers on this site as you’re better off doing it for actual cash via other sites such as Swagbucks or InstaGC to name a few.  These coins hold no value unless you think you’re going to win the sweepstakes.  Yes, you could win, but your chances are slim.

So, what are you playing this game for exactly, and how does it fit the theme of this site?  Can you win real money with Coin Dozer?

Well, just like at an arcade, you can win multiple prizes by play the game; however, these prizes are virtual most of the time.  What you’re trying to win is the sweepstakes posted for the day.  For instance, on the day I was playing, I could win a $100 Amazon gift card.  This went out to the first place person, but they would continue to give out prizes to 100 people.  Second place would get $20, whereas the last 70 would get $1.  Essentially, they give away $335 every day, and this doesn’t include the weekly sweepstakes, where the company gives out $1,000 plus prizes to 500 random people.

It’s a raffle of sorts and that’s the only thing within the game that will have a monetary value.  So, yes, like playing the lotto, it’s the luck of the draw.  You do need to reach level three to be eligible, however.

As for the virtual prizes, there a few of them, including a bear (generates coins), a dart (increases your chances at balloon pop), a watch (unlocks special coins), and duckies (puzzle pieces will appear more often).

In the end, there are no points in exchange for a prize; rather, it’s play for tickets to win a prize.  You can’t earn money.  And, if you’re wondering, people do win, as seen in this Reddit thread.

3/10In the end, Coin Dozer can be fun, but you won’t make anything.  It’s just a lottery game of sorts.    I do believe they pay out, but with millions of users, you’re going to be competing with a lot of competition.  As humans, we get addicted to these games to level up, etc.  But, at what costs?  What are we achieving?  The company will collect your data, all for what?  A measly Amazon card?  Meh.

As always, check out the site as I have hundreds of ways to make, save and be smart with your money.  I also have a YouTube channel that I update as well, providing the same type of content.

Don’t forget to comment if you have something to add!  Thanks for watching.